Reveling in the Christmas Season: A Review of Harvard’s Christmas Revels 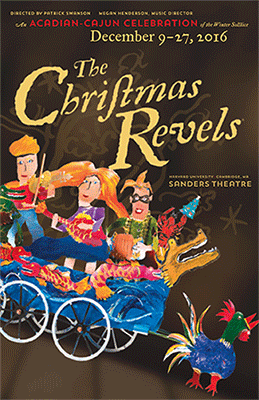 The Christmas Revels is an annual show performed at Harvard University’s Sanders Theater. Each year, the show celebrates a different European culture by selecting a particularly poignant moment in history and weaving a plot that illustrates that moment in history with traditional folklore, costumes, and songs of that culture in that time.

Contrary to the title of the production, The Christmas Revels is a celebration of the Winter Solstice and the New Year as well as of Christmas. This year, The Christmas Revels told the story of the Acadians; a group of people who left France in the early 17th century and settled in a part of what is now known as Nova Scotia, naming their new home “Acadie.” After living peacefully with few ‘interruptions’ for about a century, the French and Indian War begins. Acadie, which was French land, is claimed by the British and renamed “Nova Scotia”. The Acadians must abide by British law or else be forced out of their land. Other than refusing to convert to the Anglican religion, the Acadians agree to all stipulations set by England, and prosperity ensues for the next twenty years.

They travel northward and cannot have a “proper Christmas,” much to the children’s disappointment. However, because of one little girl’s wish, three men from Louisiana dressed as kings appear on Christmas Day to bring the Acadians a “proper Christmas” – along with some spirit and fun. They celebrate all the way to Louisiana, where the party continues. The Acadians then change their name to the Cajuns, a group still thriving in Louisiana today.

I have seen The Christmas Revels every year since I was nine, and this year’s production was my absolute favorite. I learned about the French and Indian War extensively in my freshman and sophomore years, which helped me understand the background of the Acadian’s story.

Much of the music was in French, which made it difficult for any audience members who didn’t have any background in the French language to understand the songs. However, whether the song’s tune was haunting, rhythmic folk-type, a lullaby, or rousingly boisterous, the instrumentals and melodic notes alone told the story. Because I have taken French for roughly two and a half years, I was able to decode a fair portion of the lyrics, and I appreciated the music thoroughly. There was one drawback to the show: Every year, there are certain songs and scenes that occur at the same point in the production. For example, “The Lord of the Dance” is sung right before intermission after the first act, and involves the whole audience joining hands and parading in lines into the foyer of Sanders Theater to dance to said song with the lines of people holding hands meandering the crowd. This year, the scene preceding “The Lord of the Dance” was one where the Acadians were being forced out of Nova Scotia.

The transition between such a sorrowful scene and such a vivacious one was nonexistent, which made “The Lord of the Dance” seem rather oddly placed and confusing within the show. In other words, the end of the first act did not flow terribly well. However, whatever mishaps occurred in the first act was made up for in the second act. The Louisiana-Mardi Gras theme was enormously entertaining, with plenty of jazz music, stories and jokes, brightly colored costumes, and audience interaction. Overall, The Christmas Revels was an enlivening experience. I speak for all who were there when I say that I felt as though I were revelling alongside not only the actors and actresses, but also the Acadian-Cajun people themselves.