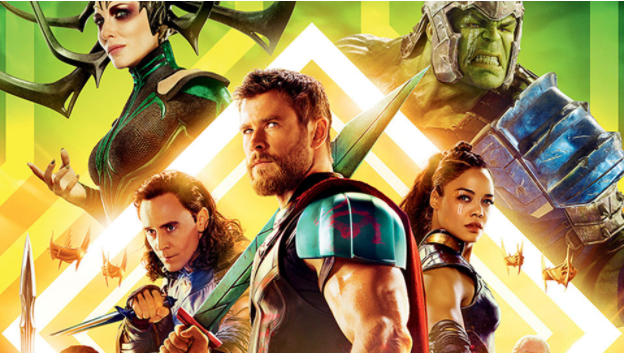 *This article has no spoilers except for what Marvel has already shown, especially through the released trailers and previous end credit scenes from other movies. Also, there is one minor spoiler for Age of Ultron and one of Thor Ragnarok’s end credit scenes will be described and explained  to how it connects to Avengers: Infinity War.*

After seven long months of anticipation since the teaser trailer was released in April, Marvel’s Thor Ragnarok was finally released on November 3rd in the United States. Fans and nerds alike went wild after this colorful, exciting, joke-filled adventure rolled onto the big screen. Ragnarok is the third movie in the “Thor” series, but there was a rather large difference in this last one from the others. Most importantly, Thor got a haircut! Actually, the real biggest difference was that it sure broke the tradition of the noble, darker, magical feel of the first two films. Ragnarok branched off into a movie purely intended for fun, actually successfully keeping out most lame jokes. Whether you want to discover how Thor coped without his hammer or to see Loki humiliated from “get help,” Thor Ragnarok displayed a colorful whirlwind of action, family, and comedy that guaranteed the audience one hundred and thirty minutes of pure entertainment.

Thor (Chris Hemsworth) was last seen on Earth in Marvel’s Age of Ultron in 2015. Apparently, he had spent those two years searching for the rest of the infinity stones. If one recalled the end credit scene to Thor: The Dark World, Loki (Tom Hiddleston) was last seen on the throne of Asgard, impersonating Odin (Anthony Hopkins), Thor’s father and Loki’s adoptive father. It was leaked out that Loki left Odin, stripped of his powers in the streets of New York as a hobo. Also, the end credit scene of Doctor Strange was a piece taken practically straight out of Ragnarok. In the Doctor Strange end credit scene, Thor and Stephen Strange (Benedict Cumberbatch) could be seen in the Sanctum Sanctorum discussing the whereabouts of Odin but not before Thor makes it clear that he did not drink tea. Based on this scene, one should be prepared to finally find out where Odin really was during most of Ragnarok.

Very soon after, Thor takes a trip to Earth, and the movie’s antagonist is introduced as Hela (Cate Blanchett), who did a truly marvelous job of portraying the power-hungry, revenge-seeking, goddess of death from the Marvel comics. As revealed in the trailer, Hela’s one ambition is to take over Asgard (what a surprise there) and restore it to what it once was in her days. She said in the trailer, “Asgard is dead… but it will be reborn in my image. I thought you’d be glad to see me.” Assuming from the lined up, battle-ready Asgardians shown in the next shot, Hela was not received kindly in Asgard.

But where does the huge battle between Hulk and Thor in Sakaar come into all this?  This part of Ragnarok was heavily based off the Planet Hulk comic book series, in which Hulk battled numerous opponents in an arena in the junk planet of Sakaar. Planet Hulk elements were embedded in the movie all over from Korg (Taika Waititi), the director of Ragnarok, to the Grandmaster’s (Jeff Goldblum) “Contest of Champions.” Ever since Hulk went missing at the end of Age of Ultron in one of Tony Stark’s quinjets, it is revealed in the second trailer that the Hulk had not transformed into Bruce Banner (Mark Ruffalo) for two years. During that time, the Hulk learns to fight opponents like Thor as a gladiator. From the moment Thor steps into the arena to the final blow, this particular action sequence held excitement, jokes (which were usually at Loki’s expense), and hand-to-hand combat cranked up to the maximum. These factors made this scene a truly unforgettable favorite.

However, what the audience can sometimes forget to do is to look for Stan Lee, the author of many original Marvel comics and featured in every Marvel movie for a cameo. Stan Lee could be a bit hard to spot, but if you do not want help to find him in the movie, skip ahead a bit. When Thor was about to enter in Sakaar’s “Contest of Champions,” he had to receive a haircut before all else. Stan Lee could be seen preparing his high-tech cutting accessories while comforting Thor that the whole process was not going to hurt a bit. Not reassured, Thor began to plead with him, begging him to not cut his hair, which had the audience giggling in their seats.

Indeed, with a whopping 92% on the Tomatometer, Thor Ragnarok was sure a crowd pleaser. Watchers are guaranteed to be disappointed to see this over-the-top, action-filled movie draw to a close. However, that question remains: “Where can I get more?” The answer lies just less than five months away. Thor will return for more adventure in Avengers: Infinity War, the final battle between the Avengers and Thanos for the six infinity stones, which together possess the power to destroy a universe. If you do not want one of the end credit scenes of Ragnarok revealed, skip ahead a bit. This scene took place immediately after the events of the movie, showing Thor and Loki discussing where they were going to next. Thor was cut off by a large shadow, plunging them into darkness. This shadow was caused by a large Chitauri-looking hsip looming over them. It was later speculated that the Chitauri ship was the ship of Thanos. The Chitauri are a race of aliens who, on Thanos’s command, attacked earth in 2012’s Avengers. In the leaked Infinity War trailer, (spoiler) Thor landed splat on the Guardians of the Galaxy’s Milano ship. Fans could only theorize that it took place shortly after the end credit scene of Thor Ragnarok. Soon, fans really will find out because Avengers: Infinity War Pt. 1 will be released on May 4th, 2018. Thor will return in this movie for more action-packed fun, living up to—maybe exceeding—Ragnarok’s fun, mythological-based roller coaster ride of pure enjoyment.