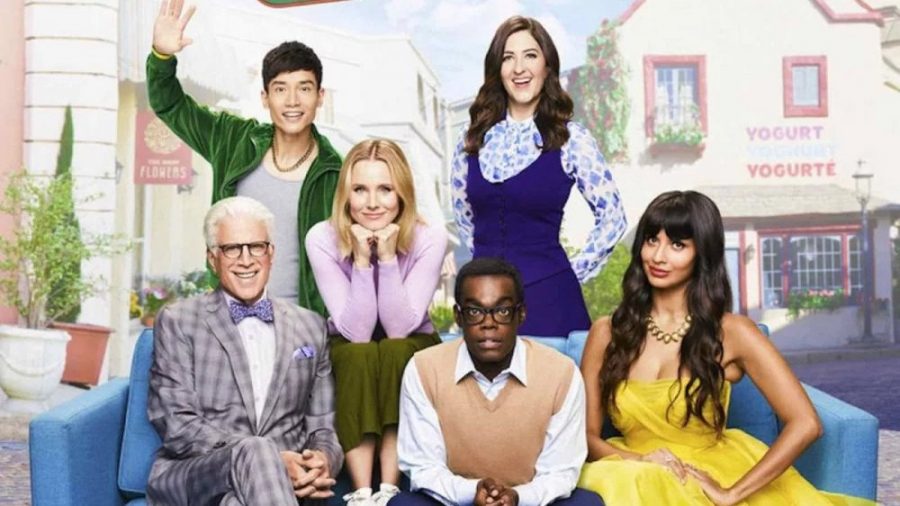 The Good Place is a TV show based on the reimagining of what happens when you die. It follows four humans’ journeys through the afterlife and beyond. Not only is it a fun, lighthearted comedy, The Good Place also poses serious questions about the nature of humanity. Its constant twists and turns left me genuinely wondering what would happen next in a way that no TV show ever has before. The level of creativity that went into the writing of this show is truly spectacular. Every season is a whole new adventure, and the lack of predictability throughout the seasons is refreshing. The show made me think, not just about what would happen next but about humanity and what really makes someone a good person.

The show begins when Eleanor Shellstrop arrives in “The Good Place”, only to realize she’s there by mistake. She enlists the help of Chidi Anagonye, a moral philosophy professor, to learn how to be a good person. From there, The Good Place goes down a winding road of twists and turns that kept me guessing until literally the last five minutes of the series finale. It raises questions such as: do the intentions of one’s actions outweigh the consequences? How much does one’s personal circumstances affect their overall “goodness” as a person? Does anyone actually deserve eternal damnation or eternal bliss? And finally, what does ultimate fulfillment look like?

The issues this show touched on and the lessons it taught about the universe and humanity will stick with me forever. Ultimately, what seemed to be a silly comedy about a supernatural misunderstanding, actually ended up being a thought provoking show with philosophical undertones. It teached how every human has the potential to be a little bit better today than they were yesterday and that there’s no universal way to judge a person’s level of “goodness.” Everyone has their own story, their own path, their own destiny. Under the right circumstances, everyone can learn more and become the best version of themself. This show about the afterlife turned out to be about all of our lives here on earth.

So if you’re looking for a show with crazy twists and turns, an incredibly creative premise, hilarious comedy, lovable characters, and heartwarming messages that will stick with long after the credits roll, check The Good Place on Netflix.