Reflections on the Right to Life: Students Share Thoughts on the MCFL Fundraising Banquet 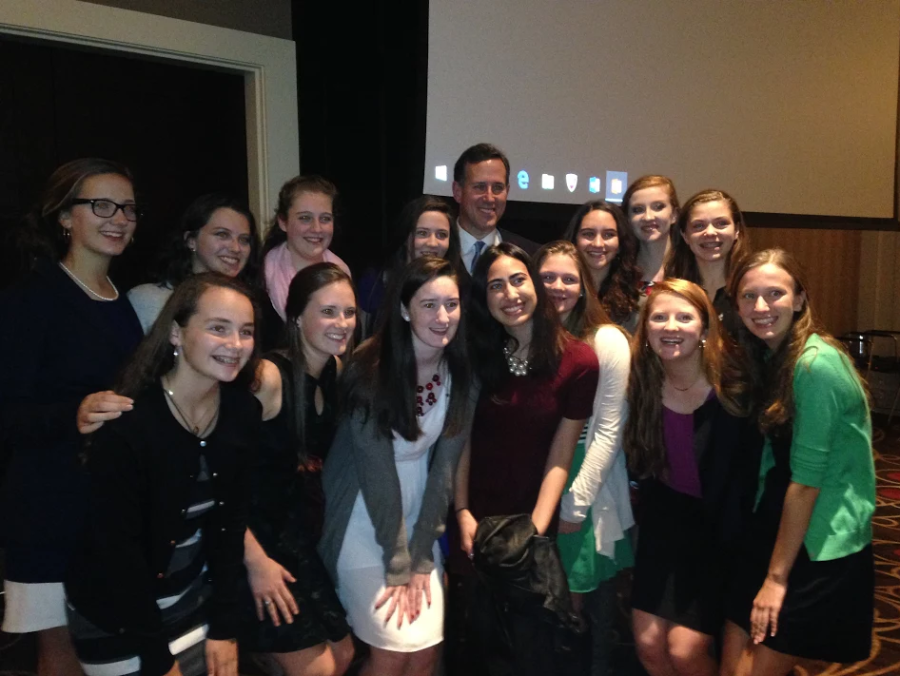 On a given Thursday night, most Montrosians attend one of the countless clubs or sports after school, return home and work on homework, study for an upcoming assessment, eat dinner, and hop into bed.  But last Thursday, October 22nd, twelve Montrosians and several Montrose parents gathered at the Four Points Hotel in Norwood for the annual Massachusetts Citizens for Life (MCFL) fundraising banquet.  With approximately 500 attendees, the banquet is MCFL’s main fundraising event of the year.  Thanks to the donation of a very generous individual, twelve Montrose girls from the Respect for Life Club were able to attend.

The event opened with an elegant dinner and dessert, and then moved to the main focus of the night: awards from MCFL to certain distinguished pro-life people, and the keynote speaker.  Although Karen Santorum was supposed to be the night’s keynote speaker, her husband, Philadelphia senator and 2016 presidential candidate, Rick Santorum, spoke in her place.  Personally, I found his speech moving and inspirational, with a deep and powerful message: life is sacred and must be protected, from conception to natural death.  When I asked other attendees their thoughts on the event, they agreed wholeheartedly. New member of the Respect for Life Club, Maddie Marcucci ‘19 said, “I thought Rick Santorum’s speech was really powerful and convincing, and I really enjoyed it. One thing that I took away from it was that it will take a group effort to stop abortion and physician assisted suicide.”  During the speech, Mr. Santorum described his personal struggle as a pro-life politician, and shared his family’s experiences in the raising of their youngest daughter, Bella.  Describing Bella’s upbringing struck a chord with all members of the audience.  Samantha Bowman said, “Bella has trisomy 18 and the Santorum family was told she wouldn’t survive after a year.  Rick Santorum’s story of how he and his wife prayed, took care, and loved their daughter, who is now 7 years old, is amazing. His story was thought and tear provoking.”

Rick Santorum’s words touched the hearts of teenagers and adults alike. As Samantha Bowman ‘16 said, “His speech embodied what the Pro-Life Club aims to do: to maintain dignity from natural conception to natural death. What I found truly inspiring is his bravery and the courage he has to stand up for what is right when everyone else is turning a blind eye to this grave issue in our country.”

The Massachusetts Citizens For Life expressed its solidarity as everyone prayed: “Lord, today I commit myself never to be passive, never to be silent, never to be forgetful of the unborn, the sick, the elderly, the disabled, and the vulnerable in our society.” With these powerful words, the Respect for Life Club continues its mission: to promote respect for all human life, and to increase awareness on issues regarding human dignity in our society.