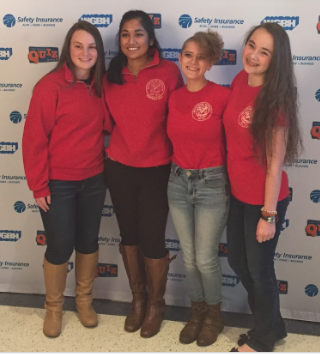 “My favorite part was being able to test my knowledge of various subjects in a competition format. it was also really cool to participate in a commercial for the HSQS promos,” said Nathalie Falcao ’17.

WGBH markets the show, now in its eighth season, by saying they are bringing “young, exciting, and smart back to the world of TV game shows” with their High School Quiz Show academic team competition for students in Massachusetts.

This year, 112 teams made up of students from across the state competed for a chance to advance to the next level, the televised matches featuring the 16 top-scoring teams. Montrose was the only all-girl quiz show team to compete this season. Each team took identical oral quizzes of questions based on the Massachusetts curriculum and current events and covering topics such as math, sports, science, literature, pop culture, and spelling.

Although we learned later that Montrose did not advance this year, we look forward to competing and improving our score next year!