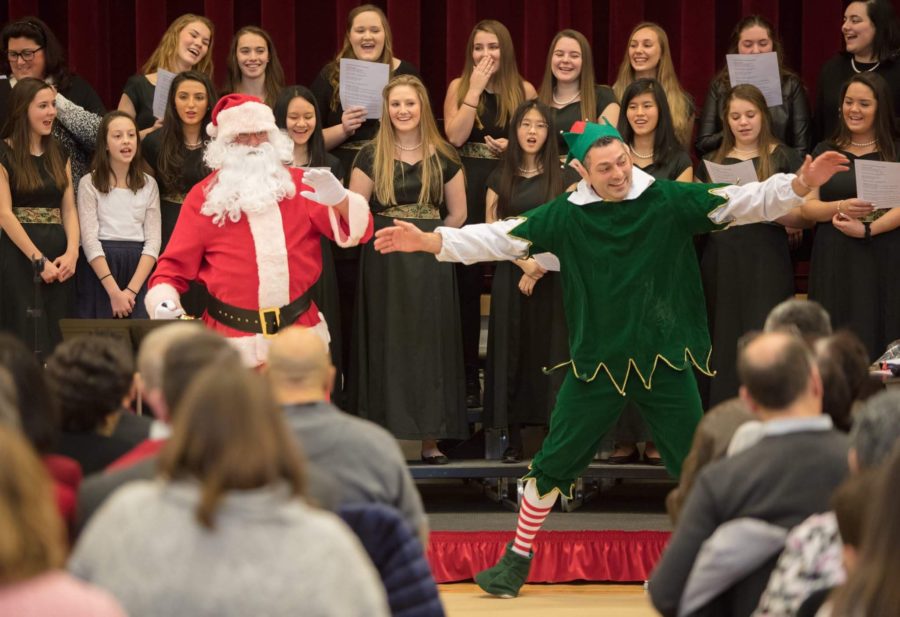 Twas the night before Christmas break and Father Dick returned to Montrose to pick up presents he was hiding.  He walked through the front entrance to realize that the area seemed darker than usual.   He opened the door and saw that the Christmas Tree was gone!  He thought to himself, “Who would take down the Christmas Tree before Epiphany?”  He went outside and shouted, “Father Joe! You aren’t going to believe it!”

When Father Joe entered, the priests looked to see if someone had moved the tree but it was nowhere to be found.  Fr. Dick said, “I think someone may have stolen the Montrose Christmas Tree!”

Fr. Joe replied, “who would steal the tree?”

Father Dick responded pensively, “Perhaps it wasn’t an inside job – it could have been people who dislike Christmas!” He continued, “What should we do, Joe? Should we call the police?”

Father Joe responded, “I don’t want to get the cops involved just yet. Let’s do our own investigation!”  The two priests agreed that it was too dark to investigate and decided to wait until the next day to solve what they were now calling the “Montrose Christmas Tree Caper.”

When they returned, they noticed a trail of pine needles leading from the school’s entrance and down the sidewalk.   The trail ended at a familiar place – the Thomas Upham House.  Father Joe said, “I’m not sure the senior citizens broke into Montrose, stole our tree and carried it here!”  Despite their doubts, they entered the residence and asked if anyone had noticed a new Christmas tree.  Everyone said no, but invited them to look around.   Soon, they spotted some pine needles outside one room.  They peeked inside to see the Montrose tree and a frail man beside it.  “Hello Fathers,” the resident said.  “What brings you by?”

“We were looking for a Christmas Tree.  We think we just found it!”, remarked Father Joe.

“THAT must explain it,” said the resident.  “Yesterday, some friendly Montrosians visited me.  I told them that this is my first Christmas without my wife and I am melancholic.  They must have taken pity on this old buck and snuck the tree in here to cheer me up!”

The priests came to the conclusion that they would leave the Christmas Tree in the man’s room.  Father Joe thought out loud: “I wonder if the girls thought they could return the Christmas Tree before January, hoping that no one would notice.”  Father Dick responded, “There’s only one way to find out.  Let’s see if the tree is back on January 3rd!”

On January 3rd, Father Dick walked by the Christmas Tree on his way to the chapel.  As he led the petitions at Mass, he offered a prayer for all the residents of the Thomas Upham House, particularly those who have lost a loved one in the past year.  When 3 students smiled and turned to each other, Father Dick knew who would be receiving some skittles for their kindness!

‘Twas the Night Before Christmas

‘Twas the night before Christmas, and the last street light flickered out. James was watching from his window in the small, bleak, stone house on Belgrove Street. His mum was downstairs, waiting by the door like she always did. Every night, ever since the war started. James sighed and turned away from the window. His dad had been gone for eighteen months, and they had never received a letter. He was a spy for Britain against the Nazis. James remembered that day. His mother had tried to hold back her tears, but as soon as his dad left, they came. His dad had told him that he was the man of the house, and that he needed to take care of his mum, and James promised. And he had tried. But it’s not easy to protect someone if you have no one to protect you. James had been picked on for dirty, baggy clothes ever since his dad left, because the rent in London was high, and his mum couldn’t ever seem to find a permanent job. All he wanted for Christmas was for his dad to come home, for them to all be together again. His mother had seemed to forget that it was Christmas. James had eaten a PB&J for dinner, and he wasn’t expecting any presents. He lay down in his bed and tried to think of the happy times, the times when he was a normal kid, with normal parents, and normal friends.

The next morning, James woke up late. The downstairs light was off. “That’s strange,” thought James,“because Mum always leaves the light on in the morning.” He rolled out of bed and walked down the creaking oak stairs. He stared. She was gone. On Christmas, she left him. James felt numb as he blindly walked up the stairs back to his bed. He lay down, but he didn’t notice. A cloud of grief overshadowed all of his other emotions. Suddenly, he was jolted out of his grief by the creaking of his front door. He heard the sound of his mum’s boots coming up the stairs. He hid his face in his tear stained pillow. She was the last person that he wanted to talk to. But James sat up as he heard another, second set of footsteps following his mum. “Could it be…?” he thought. “No,” he decided,“It must be one of her friends. Maybe she did remember that it was Christmas.” His door opened, and he pretended to be asleep. He stopped pretending when he heard the voice, the voice that he loved, the one that he had been missing for the last eighteen months. He opened his eyes and smiled up at his father. The whole family sat on James’s bed, just happy that they had each other, and that was the best Christmas present of all.

‘Twas The Night Before Christmas

‘Twas the night before Christmas, and all was quiet. Outside, owls were hooting. Snowflakes were falling softly and gracefully to the ground. At 37 Melbe Lane, three children lay silent in bed. They were frozen in the night, but yet, their hearts were warm with the thought of Christmas. Tommy, Danny and Sarah looked out their window in the middle of the cold night.

“I want to see Santa Claus this year,” said 4-year-old Sarah. The hope in her eyes was beautiful and so rare these days.

“There is no such thing as Santa, Sarah,” 12-year-old Tommy said, shaking his head. He remembered the days when he thought Santa was real, and chuckled to himself. Sarah broke into quiet sobs, leaning on Danny’s arm.

“Come on, Tommy, don’t say that,” 10-year-old Danny said. He comforted his little sister, as he shot his brother a look. Tommy rolled his eyes and went back to bed. The two other children stayed at the window, hoping to see Santa and his reindeer.

“Danny, is Santa real,” Sarah asked, looking up with her big brown eyes.

Danny sighed, “Of course, it is Sarah Bear.” He gazed out the window. The black sky went perfectly with the little, white snowflakes falling from the sky. The snow on the ground was piled up about 2 feet. The moon was full and pure white. It looked like a painting. Suddenly, there was a pitter-patter and then a thud. Tommy shot up and ran over to his siblings. He picked up little Sarah, who was scared.

“Come on, let’s see what it is,” Danny said, pulling at his brother’s wrist.

“Are you crazy? With a 4-year-old?” Sarah was squirming in his arms now. He put her down.

“What if it’s Santa,” she said with a big grin. She tugged on her slippers and ran out of the room. Tommy sighed, and followed her. Danny, with a smile, followed Tommy out their room.

When, they got downstairs, they crashed into each other! Sarah had stopped, so she could peek around the corner. The three gasped. Sarah would’ve screamed if Danny hadn’t put his hand over her mouth. There, standing in their living room, was a very large man in a red hat, coat and pants. His pants were tugged over  black boots. Even from the back, you could see his white, fluffy beard. Slung over his shoulder, was a huge sack. In his left hand, was a glass of milk. They glanced at coffee table to see that the plate of cookies was gone. They looked at each other and decided together that this was Santa. Once they persuaded Sarah that it would be a good idea to go upstairs, the boys took her upstairs. After she was tucked in, the boys went to bed.

Danny smiled, “I told you Santa was real.” Tommy shook his head and threw his pillow at Danny. It had been a good night.

Twas the night before Christmas and all creatures were stirring, except for the mouse. For the mouse lay fast asleep on the rafters of the attic. A humble family sat ‘round the fire in a humble home. The youngest girl, Angie, lay quiet on her mother’s lap. Angie had one older sibling, Nick, who read by the light of the fire. Beth, the mother stroked her daughter’s hair and hummed solemnly her favorite lullaby. Henry, the father, wrapped his sister’s christmas present which was a butterfly-shaped picture frame. The framed picture was of Henry and her sitting in a tree when they were little. He chuckled at the memory. After the picture was taken, Henry fell out of the tree and broke his arm. Angie, while on her mother’s lap, thought of the following day. Her one aunt would come and sleep over, and they would all go to Grandma’s house. The christmas tree would be overwhelmed by the amount of presents protruding from beneath it. Or would it? Henry quit his job, for he did not like his boss. They were a humble family after all. They didn’t need that many presents. Besides, Grandma and Grandpa always were very generous. The feast was also to be anticipated. There were always wonderful sweets after the perfect ham. Beth suddenly startled everyone by breaking the silence.

“ I would like to tell you about the first Christmas.” she said in her storytelling voice.

“We know what it is” the rest chorused back.

“ You can never know too much!” she laughed. “So I’ll tell you. You do not have to listen if you do not want to.”

“I will read “ said Nick blandly.

“Fine then. I will continue. There goes a story that took place long long ago. A beautifully humble girl was visited by an angel. A messenger sent from the true God above named Gabriel, came to tell The little girl, Mary, that she would conceive. He told her that God would bestow upon her a child. This child was not any child of God, but the Son of God.” said she.

At this Nick looked up, and Beth smiled.

“She was to marry most humble Joseph.” she continued.” The child was to be called Jesus. Joseph and Mary were to be married, until Joseph found out that Mary was pregnant. He backed away quietly. Then, Gabriel came to Joseph in a dream and told him the circumstances in which Mary was pregnant. Gabriel told him that the Holy Spirit gifted Mary with Jesus. After, they were married. When it was time for Jesus, the census was to take place. They journeyed off to Bethlehem. When they arrived, they searched for an inn, but no matter where they went, there was no room. They went to a cave so Mary could have her baby. They stayed where the animals slept. The lowest of the low they stayed so that God could come to save us.”

“Only that he loves you.” Beth replied.