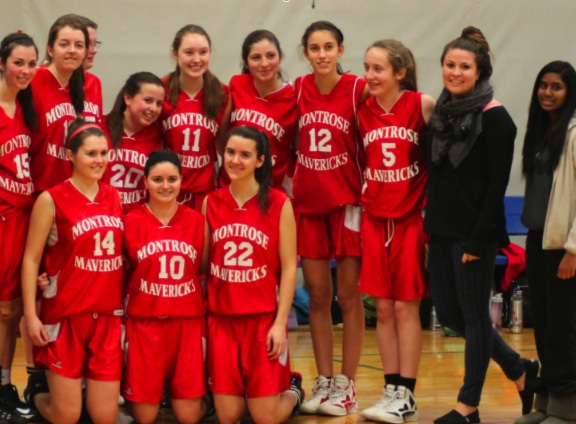 After an undefeated season in league play, the IGL championship trophy and elite recognition for all-New England play-offs in the first round of the NEPSAC tournament, Montrose’s Varsity Basketball season has come to an end. One player will continue the season, however. This Saturday’s NEPSAC All-Star game will feature  Montrose’s Catherine Conroy ’16 who has been selected as an all-league all-star.

Montrose’s loss to Vermont Academy in the semi-final round of the NEPSAC finals on Wednesday, February 26th, did not dampen the Mavericks’ high spirits. They left the court feeling proud. Coach Blackburn reported that the Vermont Academy coach and Athletic Director called her to praise the Mavericks. According to Coach Blackburn, Mr. Atkins said, “Montrose challenged our team in ways they had not yet been challenges.”

The fact that the Mavericks were invited to the NEPSAC finals was a distinct honor. Coach Blackburn explained, “Montrose was one of a very elite group of 23 teams receiving a bid to participate in this all-New England tournaments. We have again distinguished ourselves in the league.” Blackburn added that the Mavericks remained “grateful for a terrific season.”

Coach Blackburn also received a call last night from the Gann Academy coach, who revealed that her players were cheering for a Montrose NEPSAC victory. The Gann coach also said that her players who cried after the IGL game were not upset about losing; instead, they were touched by the tremendous love the Montrose fans showed their team and by the respect Montrose showed the Gann players.

Montrose’s Varsity Basketball team dominated play with Gann Academy on St. Valentine’s Day. The Gann team offered many challenges to tip Montrose from the lead. By game’s end, the Mavericks won by a handy 10 points, reclaiming the title before nearly the entire school, bussed to the event after a half-day of regular classes.

The balanced play of Montrose’s front line players posed more points of challenge than the formidable Gann team could master. Catherine Conroy proved tenacious on both sides of the ball, often leading the fast-break offense and driving-to-the-rim style of the team’s offense. Lauren Francis, Megan St. Martin, Caroline Strauss and Lindsay Lombardo dominated the boards while contributing many baskets to the win. Elizabeth Wade worked well on both sides of play, contributing lay-ups, mid-line shots, rebound points, dropping foul shots, and leading play-calls with Conroy. The refs called the game tight on fouls, and many Mavericks got caught in high foul numbers, but ultimately they stayed disciplined and no one fouled out of the game.

Fan support was a distinguishing moment to the team’s victory. Kilts lined the stands and balcony, with thundering cheers and faltering ‘waves’ mixed in with the intermittent applause and bench stomping beats. After the team circled to give a final tribute to Gann after their victory, Montrosians stormed the court and encircled the team with rousing cheers.

The Mavericks have had a remarkable season, undefeated at 14-0 in the league, and with only two losses in outside league play. The team’s success is due strong leadership, dutiful preparation and extraordinary team spirit among a balanced group of talented athletes, led by Coach Conroy (father of Catherine Conroy ’16). Point guard Elizabeth Wade ‘17 said, “The successful Montrose Varsity Basketball team is made up of an incredible group of athletes and coaches who have continuously come together to achieve our common goal of excellence.”

According to Athletic Director, Coach Blackburn, “Captain Megan St. Martin ‘14 has kept the team focused and helped ensure that the many new players who joined varsity this year feel a part of the team.”  All the players signed the team ball in tribute to Megan St. Martin. Two other seniors, Olivia Giannakopoulos  and Caroline Strauss, with all seniors three-season athletes, have  contributed to “leadership through their unselfish play and mentorship,” said Coach Blackburn.

Some newcomers have also made a difference. Elizabeth Wade ‘17 “has been a great addition, who has worked well with another smart player, Lindsay Lombardo,” Coach Blackburn added. In addition, first year varsity players, Siobhan O’Brien ‘15 and Sarah McAuliffe ‘17, have also “contributed significantly.”

The most significant factors contributing to the team’s success, according to Coach Blackburn, are “the girl’s balanced talents and unselfish teamanship.” She also praised the girl’s fast-play and smooth ball movement full court, and noted that every player scores in almost every single game.

Tyra Alexander ‘16 and Lauren Francis ‘16 speculated on the difference the new Arts & Athletic Center will make next year: “Having our own gym next year will be so exciting. We will have more time to practice, bond as a team, and we will have the advantage of having our family and friends in the stands at our games!”

Check out photos of Montrosians on and off the court at the championship game.