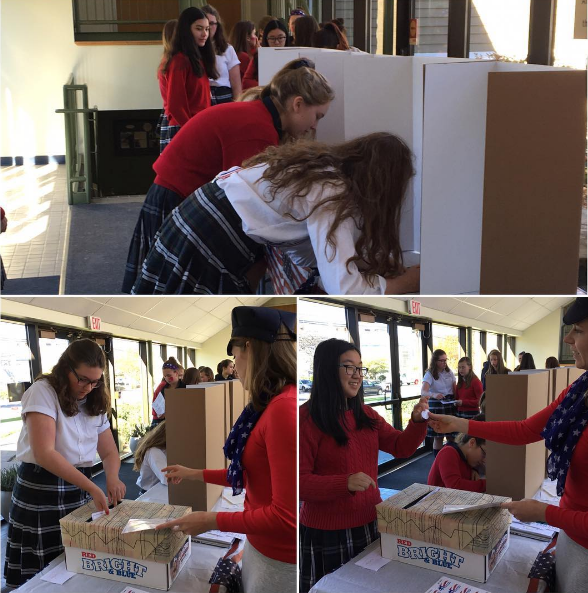 Students and teachers alike buzzed with excitement as they walked through the front doors to face six voting booths staring back at them.  Members of the eleventh grade AP Lang class walked through the halls, decked out in red, white, and blue.  “Make sure to vote!” they called to Montrosians and faculty.  Jill Stein, Gary Johnson, Hillary Clinton, and Donald Trump all made special appearances and even managed to keep interactions civil. Election Day came to Montrose!

Mrs. Whitlock’s AP Language and Composition class organized a mock election at Montrose to represent the actual election and to promote a spirit of democracy and patriotism.  Prior to the election, the class arranged posters by the Upper School lockers that explained the presidential candidates’ stances on various issues, including education, racial issues, social issues, and economics.  Upper School History teacher Mrs. Forsgard brought in puzzles, games, and posters for students to use during free times.

On Election Day, every student and faculty member had the opportunity to vote using a ballot quite similar to the one that voters used in today’s real election.  The ballot included state representatives, Norfolk County commissioner, sheriff, the ballot questions, and, of course, the presidential candidates.

Montrose radiated enthusiasm for the mock election.  Alex Condrin ‘18 said, “I think it was cute how everyone dressed up.”  The red, white, and blue accessories certainly added to the patriotic spirit zipping through the halls on Election Day.

Ciara Dunn ‘18 added, “I even saw Hillary and Donald working together and collaborating today!” Linda Chen ‘19 and Mariel Rosati ‘19 both agreed that the mock election was “really fun.”  Emily Nelson ‘20 added her view: “I thought it was really cool.  At my other school, when I was in elementary school, we had a really simple mock election.  The ballot only had the two main presidential candidates.  I liked the full ballot today, with all the representatives and the questions included.”

At the end of the day, the AP Lang class counted the votes.  In summary, Donald Trump won the presidency, 31 votes ahead of Hillary Clinton, who came in second.  Who came in third?  None other than Father Dick, whose 91st birthday we celebrated on the same day.

Thank you to everyone who made Election Day successful and an excellent way to foster a spirit of democracy and patriotism at Montrose!