Lessons in Patience and Persistence at 105 Years Old 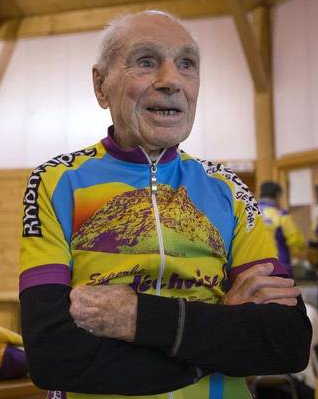 Earlier this month, an ambitious and fearless Frenchman, Robert Marchand, set a record by cycling more than 14 miles per hour. He completed a total of 92 laps, more than 16 miles. The most amazing part of it all: He’s 105 years old. In fact, the category he participated in was a category created especially for him: the 105 and over category.

As he rolled to a stop, Marchand was met with a standing ovation from the crowd who gathered to watch history in the making. What struck me the most was an interview shortly after his performance. According to the Associated Press, he said, “I did not see the sign warning me I had 10 minutes left. Otherwise I would have gone faster, I would have posted a better time. I’m now waiting for a rival.” Despite his triumph, he was not completely satisfied with himself. Why? Because he knew he could do better.

Despite what it may seem like, his attitude was not self-deprecating, but rather self-motivating. After the event, he had a bright smile on his face, clearly excited about his victory. However, he felt like he had not yet reached his full potential, and that spirit is one from which we can all learn.

One French proverb beautifully expresses Marchand’s inspiring patience and perseverance: “Petit á petit, l’oiseau fait son nid,” which translates “Little by little, the bird makes its nest.” In other words, some goals take longer to accomplish than others, but working hard and remaining committed will get you where you should be.

One triumph does not mean we can stop trying, just as one failure does not mean we should stop trying. We must continuously work on ourselves and our gifts because there is always room for improvement! I’ve got another 89 to catch up with the inspiring Robert Marchand.