The Looking Glass • May 27, 2018 • http://lookingglass.montroseschool.org/news/2018/05/27/student-government-elections-inspirations-and-tips-for-success/ 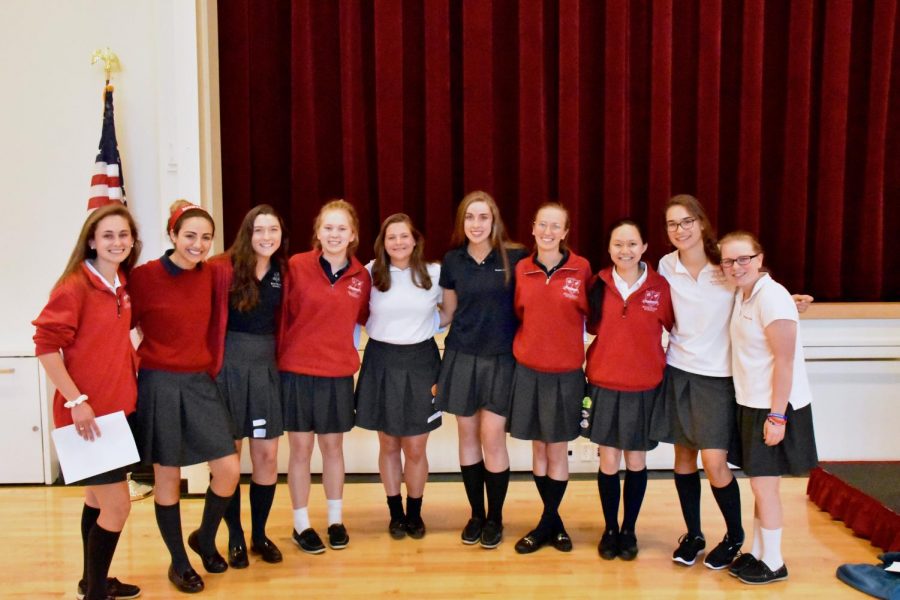 Montrosians were walking down the halls a little slower last week because they are stopping to read the clever, funny campaign posters that student government candidates have made. Slogans like “$ophie makes cents,” “I will treasure your vote,” and “Stick with Schick” have certainly caught the attention of students and teachers alike. But Student Government is about a lot more than clever slogans and meme posters. As Maddie Marcucci ‘19 said: “I am running for Exec Sec because I love Montrose, and I want to give back to a school that has given me so much.” Participating in Student Government also teaches leadership skills and instills confidence in girls.

Candidates for Executive Student Government gave their speeches on Thursday, May 17. To many of us, the mere thought of standing in front of 200 people and giving a speech sounds terrifying, but the candidates addressed their peers calmly and confidently. Sophie Kocho ‘20 even went so far as to rap half of her speech! The candidates all had such good ideas and were so persuasive that I genuinely had a very hard time deciding whom to vote for. All these amazing, smart, dedicated girls deserved to win; and, when the votes came in, it very close in some races.

Our new Executive Student Government: President Clare Melley ‘19, Vice President Kiki Karam ‘19t, Secretary Maddie Marcucci ‘19, and Treasurer Lily Wei ‘20. Congrats to next year’s leaders and thanks to all those who ran. You gave each of us in the crowd inspiring visions of how empowered, courageous, and visionary those who run for Stud Gov Exec team are; you give us a model of greatness.

As the end of another academic year winds down and we all transition to the next chapter of our scholarly lives, a new Student Government emerges with the hopes of bringing a full year of fun. The last three years, I’ve had the honor and pleasure of serving Montrose as a member of Student Government,  and I’m grateful for the opportunity to continue to serve as Stud Gov president in the coming year. Here is a list of advice I’ve gleaned over the year, and I hope this will inspire not only the Exec team but all of those who run for class officers as well.

Be creative: When you are part of Student Government, your main job is to keep the student body inspired and entertained. By thinking creatively and starting new traditions, the school will get more enthusiastic with you. Especially with CHR ideas, try and switch things up, so that they do not feel repetitive from year to year.

Stay Organized: With big projects such as Secret Santa and Field Day, it is really easy to get disorganized. Try your best not to let this happen. Create a checklist for everything that needs to get done so that when you are close to the event, you can easily see what is left. Also, plan ahead! CHR’s come up quick so having even a rough plan ahead of time can make a huge difference. Nora Clancy, current secretary, suggests, “Plan all the CHR’s for the entire year in the summer. You can always change [the plan.]”

Delegate the Work: Student Government has a lot of responsibilities, and there are so many people in the school that are willing to help. Groups, such as the class student government representatives and the spirit leaders are always eager to help, so don’t be afraid to delegate little jobs to them to make your life easier. You will also find that they will be much more invested in the events if they contribute to them.

Work as a team: The four executive members spend A LOT of them together throughout the year so being able to work well together is crucial. There will be a lot of challenges throughout the year that will help bring your team closer, but also it is important to do stuff together that does not involve student government. Our team really enjoys exec sleepovers every couple of months just to bond over things other than student government.
Learn from your mistakes: You will definitely make some mistakes throughout your time on student government, and you cannot let them discourage you. Sometimes, when you think the whole school noticed something you did wrong, they most likely didn’t. As long as you acknowledge your mistakes and fix them, there is nothing to be embarrassed of. Jocelyn Kelly, the current Vice President, states “laughing off your mistakes is the best way to handle them.” And trust me the four of us laughed a lot at ourselves this year.