The Blessings of Daily Mass 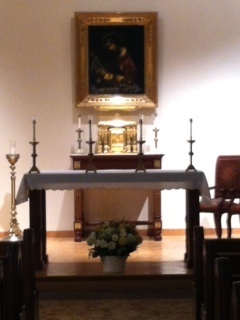 Graces are given to all people who attend Mass, not just those who receive the Blessed Sacrament.  Through going to Mass, we are given graces from God both that we ask for and that we do not ask for.  During Mass, the graces of making good decisions, repenting sins, denying temptations, forming pure thoughts, and more are showered upon us.  Saint Jerome said, “Without doubt the Lord grants all the favors which are asked of Him in Mass, provided they be those fitting for us; and, which is a matter of greater wonder, oftentimes He grants that also which is not demanded of Him, if we, on our part, put no obstacle in the way.”  We have a Sunday obligation to attend Mass.  But, when we attend Mass during the week of our own will, God smiles down on us and helps to take care of any sacrifices we may have made to go to Mass.

Why do Montrosians choose to attend daily Mass?  Nathalie Falco ‘17 stated, “I like Mass.  It’s a good time to evaluate yourself.  It’s really relaxing.  I also don’t really want to go to reading enrichment.”  Nathalie added that her favorite part of Mass are the readings.  She also likes how accessible Confession is: anyone can go after Mass and after school.  Christina Veciana ‘17 said that she goes to daily Mass because she loves communion and because she is not allowed to read the books that she wants to in reading enrichment.  Ayana Murphy ‘19 shared that her favorites part of Mass are after Communion and when Father Dick tells his jokes.  When Jensen Radner ‘17 was asked why she attends daily Mass she said, “I don’t know, it’s nice — it’s sort of a time to reflect on yourself.  I like the songs that they sing.”  Maillaine Werner ‘18 stated that her favorite part of Mass is the peace.

Whether our purpose for attending Mass is to escape reading enrichment or to quiet our hearts and sit in the presence of Jesus, God’s graces are abundantly showered upon us.  Mass is an amazing privilege that is offered to each Montrosian daily.  Saint Thomas Aquinas said, “In Mass are contained all the fruits, all the graces, all those immense treasures which the Son of God poured out so abundantly upon the Church, His Spouse, in the sacrifice of the Cross.”