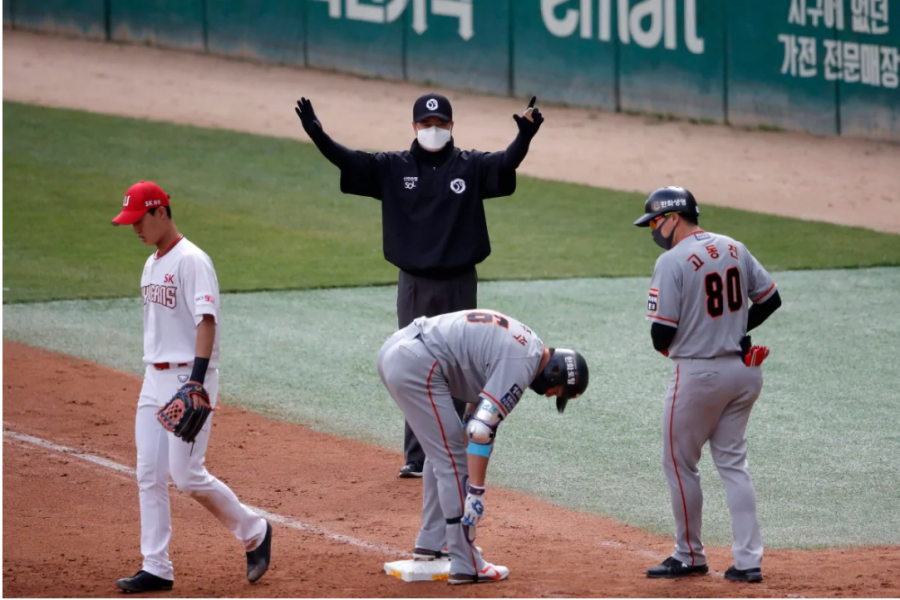 If you know me at all, you know that I love baseball, no I don’t love baseball, I am OBSESSED  with baseball. I love everything about it, the atmosphere of the ballpark, the long, tense, extra inning games, the team rivalries, and the incredible history. For me, the beginning of baseball season is the starting point of summer. I look forward to opening day all winter and I rarely miss a game during the season.

This year, — as you may have guessed– I was incredibly disappointed. The MLB season has already been delayed over two months and, with some of the players upset over the commissioner’s plan to reopen (it means a temporary pay cut), who knows when our favorite MLB teams will be back. However, there is some good news. The South Korean Baseball Organization (the KBO) is playing regular games without fans, and ESPN worked out a deal with the KBO so they can broadcast the games!

Now, the KBO is very different from the MLB. First of all, the KBO was founded in 1982, which is relatively recent considering that the MLB has been around since 1869. The KBO also has fewer teams: ten to the MLB’s thirty. But baseball is still baseball, and while I was learning more about the KBO teams, I was able to find the KBO equivalent to a lot of MLB teams.

Who Should I Root for in the KBO?

The Doosan Bears, for example, are probably most like the New York Yankees. They have a reputation for winning a lot, and have formed rivalries with several other teams because of it. In my opinion, the two teams that are most like the Boston Red Sox are the LG Twins and the Lotte Giants. An article I read compared the LG Twins to the pre-2004 Red Sox. They always seem to put together a talented team, but they can never do enough to win it all. The Lotte Giants remind me of the 2013 Red Sox. Last year they finished the season in last place, but this year, they’ve made some promising acquisitions. The 2012 Red Sox also finished in the basement, but in 2013 they dominated the league and came out on top with a World Series win. Both the Giants and the Twins have been in the league since 1982. They have a great history and absolutely die hard fans. I love a good underdog story, so choosing these teams to root for was a no brainer for me, but if you prefer rooting for a team that is known for winning you might want to root for the Bears or the Lions. The Bears are the reigning Korean Series Champions and they are definitely in a good place to win again. The Lions are seven time champions, four of which came in the past ten years, and they do not look like they are slowing down. The Kia Tigers might also be a team to root for. They have a great history, a great fanbase, and they have won the most Korean Series in the KBO, but they are in a rebuilding phase at the moment, so rooting for them may prove frustrating.

What’s so Special about the KBO?

Since the KBO was founded over 100 years after the MLB, they have put a slightly more modern spin on America’s pastime. Bat flipping after home runs, which sometimes frustrates the pitchers in the MLB, is like second nature in Korea. The KBO also allows a limited number of foreign players per team, so fans of the MLB might recognize a couple of players. One former Red Sox player, William Cuevas, plays for the KT Wiz. Raul Alcantara, who now plays for the Doosan Bears, played for the Red Sox and the Oakland Athletics for a few years.

Another fun fact about the KBO is that fans are allowed to bring their own food to the games. Although there are no fans at the ballparks now, I’m sure that that is a reason why there are so many fans at the KBO ballparks.

So, if you’re a Red Sox fan, a Yankees fan, or just want a professional team to root for, hop on the KBO bandwagon. I can’t promise that it will be the same as rooting for your team, but I think you can expect some great pitching, hitting, and an epic playoff race!