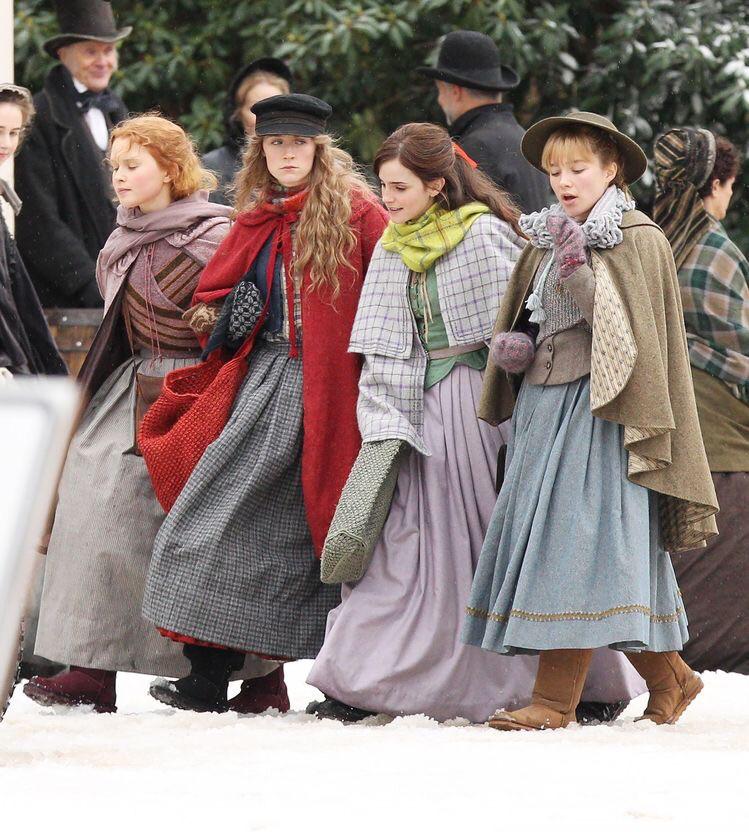 As an aspiring fashion historian, I often find myself watching movies set in the past and asking myself, “Are these costumes accurate?” There are a few ways of knowing if the costumes are realistic to the historical setting such as through observing old paintings, lasting garments, and of course photographs. The reason I find fashion history so interesting is because different clothing styles reflect what was going on in their respective time period.  For example, in the 1910s, women began abandoning their corsets because the metal used in them were rationed for WW1. In the 1940s, women adopted men’s attire because they were entering the workforce while their husbands were off fighting in the war (as you can tell I have a lot of these fun facts up my sleeve). And as fun as fashion history is to study, fashion trends come in and out of style so quickly that getting them accurate in films can be difficult.

Recently, while watching the 2019 adaptation of Little Women, one important question kept popping up in my head: What did the movie get right and wrong when making these “historically accurate” costumes? Before I go into detail, I would like to make it clear that this article is in no way meant to discredit the costume designer of the film. Most of the time while working on movies, designers could have intended to create historically accurate costumes but the artistic vision of the director and sometimes even the actors can override the designer’s decision. Because of this, some important elements can get lost in portraying historically accurate fashions in movies.

First, if we’re going to decipher whether the costumes in Little Women are historically accurate, we need to establish the time period. The film takes place during the Civil War era (1860s) in Massachusetts and flashes forward to the early 1870s. Let’s start with the outfits they wear at the beginning of the film as seen in this photo. My first observation is their hair. Why exactly is it down? In the 1860’s, women and girls almost always wore their hair up in a low bun or another similar updo. Hairstyles like these were not a symbol of social status either; as they were done at home, women weren’t paying to go to salons like they do today. I think we can excuse Jo for this because it is very on brand for her character to defy social and fashion norms. However, Meg and Amy often talk about how they want to fit in with their wealthy friends so it does not make sense that they would wear their hair in loose waves like in the picture. If the director really wanted their hair down, she could’ve used the much less popular style of the time: tight, tight ringlet curls with a half updo in the back. This could’ve been a good option for the film because it was more commonly worn by younger women. The other problem with the head region is the fact that they are not wearing any bonnets; we do not see one bonnet in this movie. Bonnets were always worn by women in public, and were mainly used to protect their hairstyles from getting messy, to protect their faces from the sun, and also because they were quite fashionable. Everyone from servants to royalty were wearing them, so why weren’t the March girls?

Moving down to their outfits, I would like to point something out before we get to the specifics. These 4 sisters are not from a wealthy family yet somehow they have a new dress for every occasion and we never see the same dress worn on more than one sister. This would have been extremely unlikely because of the cotton shortage in the south during the Civil War. On top of that, the film takes place in the North where products like cotton were especially scarce. How many dresses you had was a sign of how much cotton fabric you could afford, so the March girls realistically would’ve had about 4 or 5 dresses that they would rotate between one another. Something impressive that the movie accurately portrayed however, was the color of Meg’s scarf. She was wearing a bright green one, which seems out of place at first glance next to her muted outfit, but actually brings some interesting historical accuracy to her look. In the 1850s, only a few years prior to the start of this film’s setting, the first synthetic dyes produced on an industrial scale were introduced. Colors such as royal blues, bright purples, and the bright green of Meg’s scarf were now available to common people. Good attention to detail, guys.

Next, I want to address something really important: the silhouette. Back when women wore dresses every day, decades of fashion were characterized by their silhouettes. In the 1860s, the silhouette included rounded shoulders, a narrow waist, and very full skirts. This look was achieved by wearing a corset and a crinoline under your dress. They were worn as evening wear and casual wear no matter what social class you held. So why don’t we see any crinolines in these outfits? The March girls all have rather slim silhouettes for the time period, which would have been seen as very unfashionable and unsophisticated in their society. Next, we need to address the time jump to the early 1870s, when the girls are all grown up. Why do they all of a sudden have crinolines now? It makes very little sense that when we jump about 8 years into the future, everyone is just now adopting the 1860s silhouette of a narrow waist and a full skirt, along with a low bun. By the late 1860s and early 1870s, that style was no longer fashionable. Just about everyone switched to a much slimmer silhouette as well as high updos rather than low ones. I’m especially disappointed in Amy because she lived in Paris (the fashion capital of the world) at this time with her wealthy aunt, and would’ve been wearing the newest trends. This was an opportunity for the filmmakers to show how much time had passed when they kept jumping forward and backward in time. People who saw the film knowing nothing about the story prior to viewing it said that it was very confusing trying to figure out what was a flashback and what wasn’t. “Costume accuracy would’ve definitely helped with this”, says fashion expert Micarah Tewers.

Here’s my biggest problem with the costumes: Let’s direct our attention to what Amy is wearing on her feet. In this particular shot, she is wearing UGGs. Keep in mind that UGG boots were not invented until about 120 years after this movie is set. So it is unrealistic for Amy to have worn those shoes. If she were wearing accurate shoes, they would’ve most likely been made of leather and would have laced along the front or the side.

The poor research done on these costumes does not take away the fact that Little Women was a masterpiece in all other departments. Again, Micarah Tewers summed it up perfectly when she said, “It is a little disappointing though, that the film won an Oscar for the costume design, taking away the award for more deserving films, such as JoJo Rabbit, and Joker who had excellent costume designs.” If you want more information on this topic, I highly recommend the YouTube videos by Micarah Tewers and Bernadette Banner on Little Women (2019), as I got a lot of my information from their videos.