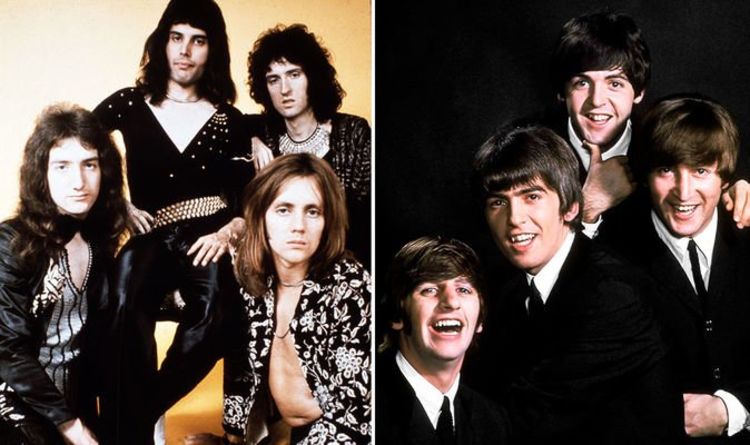 Ah, old British rock bands. There’s so many of them, so in this article, I’ll just be focusing on three. Let’s start with the least popular one: Herman’s Hermits. You might have heard of some of their biggest hits like “I’m Into Something Good,” “Mrs. Brown You’ve Got a Lovely Daughter,” and “I’m Henry the Eighth I Am.” My personal favorite song from this group is “I’m Henry the Eighth I am”. Sure, all the verses are the exact same, but it’s a pretty catchy song. There were a lot of members in the group: Peter Noone, Karl Green, Derek Leckenby, Barry Whitwam, Keith Hopwood, Vance Brescia, Geoff Foot and Kevan Lingard. This group was the most popular in the 1960s and early 70s, and they became a group in 1963.

Now I’m going to talk about my second favorite band in the entire world: The Beatles. The members of The Beatles are Paul McCartney, John Lennon, George Harrison and Ringo Starr. The two lead singers were Paul and John, although George and Ringo sang the lead in some songs that they wrote. All of their songs are so catchy (even though some of them don’t really make much sense), so here are the most popular ones. The most popular Beatles song is “Hey Jude,” which was number one on the Billboard top 100 for nine weeks after it was released. However, the biggest Beatles hit was “ She Loves You.” The Beatles released 12 studio albums and sold 600 million albums worldwide. The best selling album was The White Album which included some of the best Beatles songs (in my opinion). My favorite on that album was “Blackbird.” This song was performed entirely by Paul McCartney, who plays the guitar, taps his foot, and sings for the entire 2 minutes and 18 seconds of the beautiful and melancholic song. George Harrison wrote the song “Here Comes the Sun” which turned out to be a pretty big hit for The Beatles. Although the big hit “ Yellow Submarine” was written by Paul, Ringo did an amazing job singing it. Ringo also wrote a song that wasn’t as popular and a bit weird called “Octopus’s Garden.” Ringo was the drummer of The Beatles, George would mostly harmonize with Paul and play one of the guitars, Paul was one of the lead singers who played the guitar and piano, and John was the lead singer who also played the guitar and piano. My favorite Beatles album is Sgt. Pepper’s Lonely Hearts Club Band (jeez that’s a long name). This album includes the songs “Sgt. Pepper’s Lonely Hearts Club Band,” “With a little Help from my Friends’,’ “Lucy in the Sky with Diamonds,” “Getting Better,” “ Fixing a Hole,” “ When I’m Sixty-Four,” “Penny Lane,” and many others.

The last British Rock Band for today and my favorite band EVER: Queen. I mean, how can you not love Queen? With Freddie Mercury’s vocals, extravagant costumes for concerts and piano playing, Brian May’s amazing electric guitar work, John Deacon’s bass and guitar playing and Roger Taylor’s fantastic drum playing, his one hit “I’m in Love with My Car,” and the catchphrase “Ready Freddie?” that he would shout at almost every concert if the band decided to play the amazing song “Crazy Little Thing Called Love” (which was a tribute to the awesome Elvis Presley). Queen had many hits over the years, but their biggest hit was “Bohemian Rhapsody”. This song is six minutes of pure awesome-ness. It starts off pretty slow with a world famous piano solo by Freddie and then goes into a really cool operatic section. After that, it goes into an epic guitar solo and ends off slow again. Another great Queen song is “Don’t Stop Me Now.” It starts off pretty slow, but then gets faster. The whole song is Freddie singing about how no one can stop him from having a good time. In my opinion, it’s a really good positive song that anyone can easily jam out to.

The next thing I’m going to talk about is probably very controversial for music lovers. If you like One Direction, I suggest skipping the next few sentences so you won’t get upset about what I’m about to say. I’m sure all of you who are still reading this have heard of the famous Queen song “We Will Rock You.” The down beat itself might be Queen’s most well known down beat other than “Under Pressure,” and “Another One Bites the Dust.” In 2012, the band One Direction released a song called “Rock Me” with the exact same down beat as “We Will Rock You.” Even the lyrics for the refrain were similar. The lyrics for “We Will Rock You” are “We will we will rock you” and for “Rock Me”, the lyrics are “I want you to rock me, rock me, rock me, yeah.” Is it just me, or are those lyrics pretty similar?

All those who like One Direction can come back now. Another Queen song that had the down beat copied is the song “Under Pressure.” This down beat was copied in 1983 when an American rapper who went by the name of Vanilla Ice came out with a song called “Ice Ice Baby.” Again, the song had the EXACT same down beat. The lyrics were not similar at all, but still, Queen and David Bowie (who starred in the song) decided to sue Vanilla Ice in 1990. They won and got official songwriting credits on “Ice Ice Baby.”

In conclusion, each of these bands are very good and somewhat overlooked (by our generation). Many of their songs are well known and can be recognized very easily. Even if you think they’re not your style of music, you could still listen to them. Who knows, it might change your opinion. I hope you consider listening to these bands and I hope you enjoyed my article!