The Looking Glass • May 7, 2021 • https://lookingglass.montroseschool.org/arts-entertainment/2021/05/07/presenting-captain-jack-sparrow/ 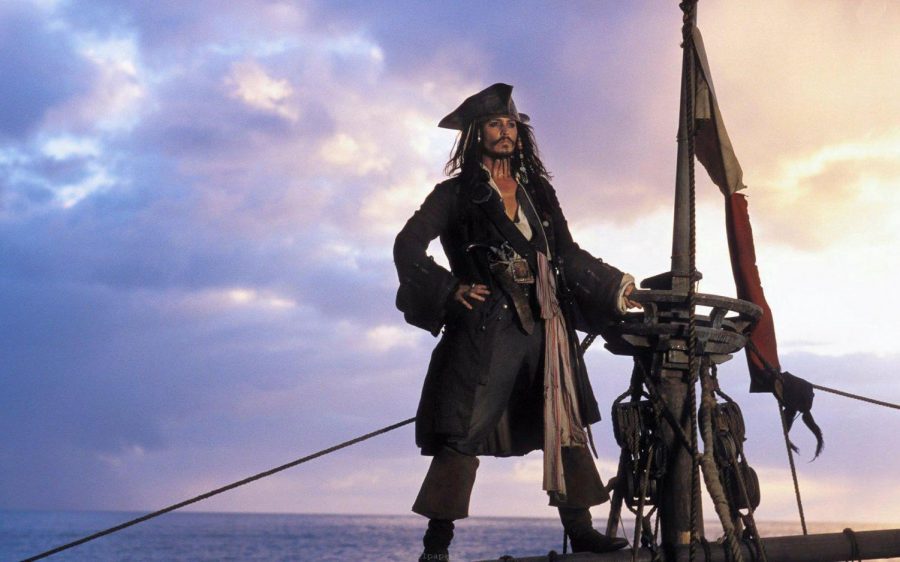 Jack Sparrow is an absolutely amazing character — er- sorry — Captain Jack Sparrow. He can be considered a villain in the movies Pirates of the Caribbean, but he is a hilarious one. He has a special way of doing things that makes you laugh. For example, in The Dead Man’s Chest, Jack is running away from a tribe of natives who are trying to kill him; and, when he is running towards his ship, “The Black Pearl”, he runs waving his arms in the air and leaning back a bit while screaming his head off. Another example of Jack being funny is when, in The Curse of the Black Pearl, Jack is about to be hanged as someone with a list of charges that detail all of the bad things he has done. He at one point says: “Impersonating the cleric of the Church of England…” — and when the person says this, Jack laughs to himself as if saying “Oh, I remember that — good times.” But, he is laughing while about to be killed! It brightens the scene so much more. Captain Sparrow is usually called, ‘Jack Sparrow,’ which annoys him a lot because he is Captain of the ship The Black Pearl, yet no one remembers the Captain in his name. Throughout the movies, people don’t say the Captain, and there is always someone correcting the person. Jack says many funny and wise quotes. A few examples are:

“Just close your eyes and pretend it is all a bad dream. That’s how I get by.”
“The problem is not the problem. The problem is your attitude about the problem.”
“Crazy people don’t know they are crazy, I know I am crazy therefore I am not crazy. Isn’t that crazy?”

In The Dead Man’s Chest. Elizabeth, one of Jack’s friends says, “There will come a time when you have a chance to show it. To do the right thing.” And Jack responds with, “I love those moments. I like to wave at them as they pass by.” Later in that movie, Jack, Norrington, and Elizabeth find a chest and Norrington says: “You were actually telling the truth!” And Captain Jack responds: “Yes I do that quite a lot…yet people are always surprised.” A few minutes later, Jack admits that he had lied to Elizabeth — when, a few moments before, he said he told the truth a lot. His ironic comments add to the richness of his character.

Pearl, when soldiers capture Jack, and Norrington, their leader tells Jack, “You are without a doubt the worst pirate I have ever heard off.” And Jack, instead of being offended like General Norrigton wanted him to, he responds: “But you have heard of me.”

Last but not least, in the second movie (Dead Man’s Chest), Jack is being hunted by Davy Jones, the octopus-like captain on the Flying Dutchman. To stay safe, Jack has to stay on land, and he goes to the Island of the Cannibals who want to eat him. If he wants to stay alive, he has to go to sea to escape them. He goes on the sea again and is still not safe. He travels to Tia Dalma, a witch that lives near a river, to seek help. There, she gives Jack a jar of dirt because, if he wants to be safe on the sea, he has to take land with him.

Later on in the movie, Jack Sparrow and his crew meet Davy Jones and his crew. There Jack says: “I’ve got a jar of dirt, I’ve got a jar of dirt, and guess what’s inside it?” in a singy song voice. This, being as hilarious as it is, is made even better because Johnny Depp, who portrays Jack, sings the song when it wasn’t in the script. Orlando Bloom (Will) and Keira Knightley (Elizabeth) have very confused expressions on their faces. You can even see Orlando Bloom look at the people behind camera, asking what is going on. Johnny Depp was the perfect actor to play Captain Jack Sparrow, and he made all of the movies original and funny.

I have only seen the first two movies, but I am a true fan of Jack Sparrow, and laugh so much when I watch him throughout The Pirates of the Caribbean.