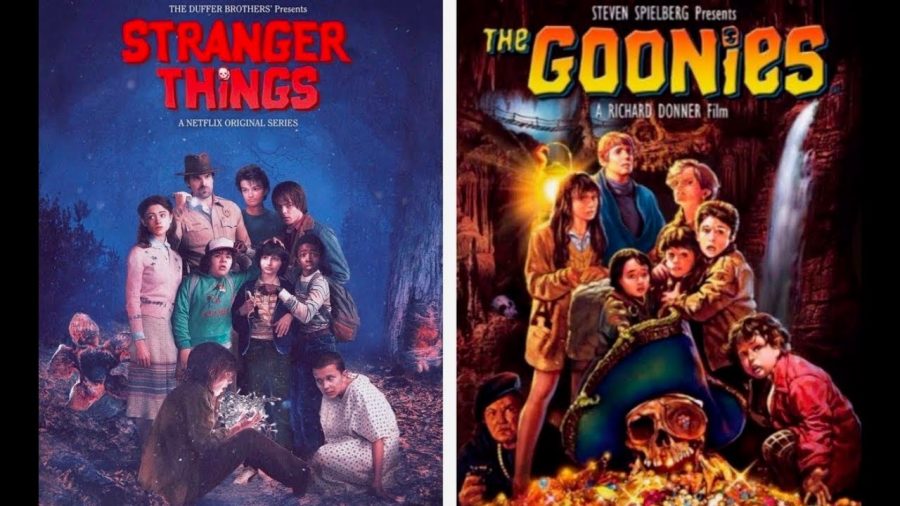 Students share their thoughts on iconic movies and TV shows such as Stranger Things and The Goonies.

My best friend and I both agree that old TV shows and movies are most certainly the best, especially if that TV show or movie is like the iconic Singing in the Rain, Mary Poppins, Star Wars, Indiana Jones, E.T., The Goonies, Napoleon Dynamite, Gilmore Girls, Nacho Libre, any kind of Disney princess movie (or old Disney movies) — and many more. Some of these don’t even have to be considered “old.” They could take place in an older time period, like Stranger Things, for example. This show is also, by far, one of the best “still waiting till the next season comes out” kind of shows.

Some of the best directors and ideas for movies were made in the second half of the 20th century, from the 1950s-2000s. Each director had their own addicting spark of an inspired idea that makes you want to watch on and on. It’s almost as good as the nostalgic smell of an old book in your elementary school library (I know, weird analogy, but I think you know what I mean). Some people might develop a preference for a particular time period or for a variety of time periods. For example, I love TV shows and movies such as Stranger Things that takes place in the 80s, Gilmore Girls that takes place in the 90s and 2000s,  E.T. that actually takes place in the 80s, and The Goonies that also takes place in the 80s. My friend Keira, however, loves movies such as Mary Poppins and Singing in the Rain, which she reminds me every day that I haven’t watched yet. Even though she has not watched The Goonies. I know, shocker.

Some people have not watched The Sound of Music, Mary Poppins, Singing in the Rain, or It’s A Wonderful Life. For example, my friend Rachael tried to watch Mary Poppins Returns without watching the original first, and she was obviously very confused.

Some ideas that were used for older movies are used for a lot of movies today. For example, High School Musical is a lot like older musical dramas, but older dramas are usually not as cheesy and predictable.

The Sound of Music is one of my favorite movies for many reasons, one of them being that the music is more instrumental than other musicals. The musical is much more well-known and much more articulate than other musical soundtracks. Another reason why I love this movie is because it’s also based on a true story. It is a little exaggerated, but that just makes it better. Even the acting skills are amazing! The main character is played by Julie Andrews, who is a very talented actress in my opinion.

You’ve heard of the love of older movies from both Keira and me, but what about the good people of Montrose?

Maria Dodds Silveyra ‘26 said: “I like older movies better. My favorite one is called Two Brothers, and although I love older movies, my favorite newer movie has to be The Greatest Showman.” I totally agree with Maria that older movies are great and that some are fun to watch over and over again. Gabriella Dansereau ‘26 said: “I prefer older movies. One of my favorite older movies is Mr. Smith Goes to Washington. If I had to choose a newer movie that I really like it would be Hamilton.” I agree with Gabriella. Even though I have not seen either of those movies/musicals, I love the Hamilton soundtrack. One other quote that really stood out and is shown so much in older movie plots was: “Older movies are usually better because they are more rooted in moral principles.” This is usually very true and is something that I was able to notice over time. This is probably what makes those movies and TV shows so enjoyable and fun to watch over and over.

In our opinion, we think that old movies are the best kind to watch because they are more classic and original. The next time you sit down to watch a movie, give a classic a try and see how you like it.