The Looking Glass • May 27, 2021 • https://lookingglass.montroseschool.org/arts-entertainment/2021/05/27/performing-arts-showcase-review/ 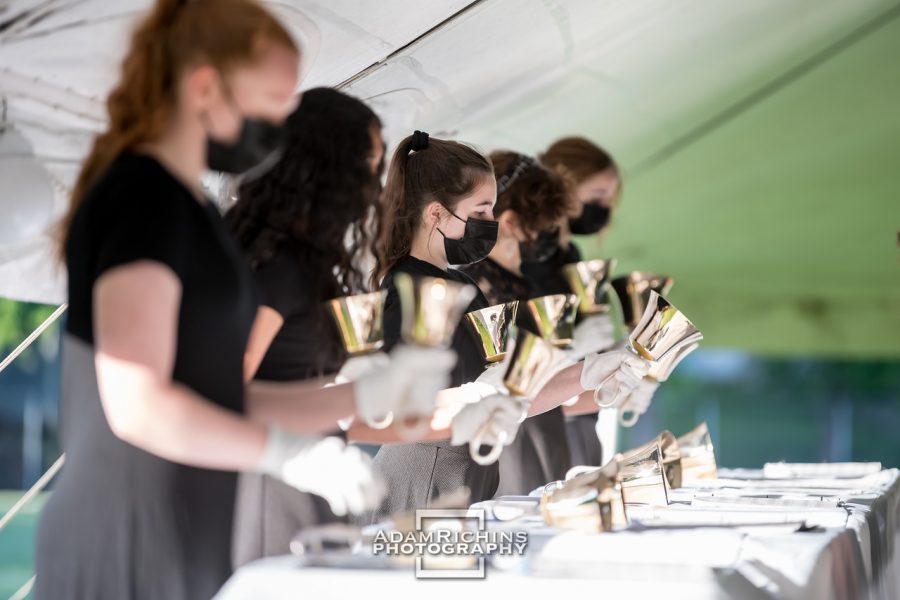 Montrose holds its largest school event since the pandemic to celebrate the arts.

On Monday, Montrose held their Performing Arts Showcase on Miracle Field and their Fine Arts Showcase in the quad. As a replacement for the ordinary spring concert, handbells, tone chimes, and the Treblemakers all performed pieces they have been practicing all year. The main event of the spring concert is the chorus, and of course this year there was no chorus because singing is on hold. Nevertheless, the performers put on a great show: simple, short, and sweet.

First, handbells played their Disney medley, starting with “A Whole New World.” They continued on with “Let it Go” and “Go the Distance” from Disney’s Frozen and Hercules, respectively. Because it was outside, it got hard to hear at times, but otherwise the quality was the same as usual! Treblemaker Elyza Tuan ‘23 commented: “It was low pressure in a way. It wasn’t like a big bang coming back, but it was a nice thing to have.” The bells have been practicing all year, and to finally be able to perform what they had been working so hard on is a blessing.

After the handbells performance came tone chimes. Mrs. Demirjan is handed new middle schoolers every year, and somehow teaches them to create beautiful melodies, working together towards one goal. Each of the middle school classes performed, playing “Twinkle Twinkle Little Star,” “Chorale,” “Londonderry Air,” and “Trumpet Voluntary.” One middle school member added: “It [was] slightly nerve-racking, but I’m somewhat used to performing so I wasn’t too scared.” Other middle schoolers agreed that they were nervous — and excited. They also pretty unanimously agreed that it was cold.

The Treblemakers came next, and as always their performance was stellar! Starting with “Electric Love” by Borns, they urged everyone NOT to clap, a good piece of advice as we would not have been able to hear their incredible vocals. Then they sang “Feel It Still” by Portugal the Man. It was another amazing song with complex beats and beautiful harmonies.

Although we were unable to have an ordinary spring concert, the Performing Arts Showcase allowed the musicians who have worked hard all year to perform their pieces and show off their hard work.