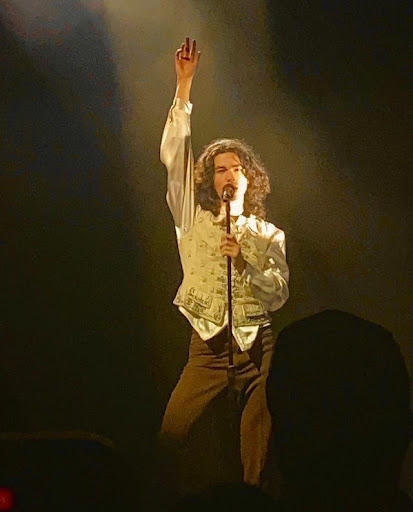 As Conan Gray’s North American tour comes to a close — and it being a month since I saw him in concert — I thought it was the perfect time to relive and review his concert.

On March 18, Elena Sereiva ’25 and I were finally at the Orpheum Theater, where we would be seeing Conan Gray singing onstage in just a few short hours. After getting the tickets at the last minute and thinking that Covid-19 could postpone the show, it would be an understatement to say that we were very excited to be there. After two weeks of outfit planning, anticipating his setlist, and freaking out that we were actually going, the moment had arrived. I think I speak for the both of us when I say that it did not disappoint.

After an amazing opening act by European singer Bülow, who sang some of her original songs, it was time. The moment we had been looking forward to for the past two weeks since we got tickets. But to be honest, we had been waiting for this moment since we both started listening to him.

After two minutes of anticipation while the stage was lit up in preparation for his entrance, we finally heard the stomp of his boot steps. The moment had come and many emotions along with it. When he finally started singing his hit song “Wish You Were Sober” and dancing around the stage, I was in pure shock. I’m not ashamed to admit it; I definitely shed a tear. I finally got to see someone who inspired me so much in person.

The night just kept getting better and better. His setlist included songs from his most recent album Kid Krow, the hit song “Lookalike” from his EP, and new songs he had just released (which were later confirmed to be songs he is putting on his new album Superache). My favorite songs he performed were the upbeat “Wish You Were Sober” and, in direct contrast, “Astronomy.” I even got to hear my most-listened-to song on Spotify of 2021, “People Watching.” Safe to say, the live performances of these songs did not miss.

When I asked Elena what her favorite moment of the show was, she said: “My favorite moment was the suspenseful beginning and the energy of the crowd when we were waiting for Conan.”

Hana Shinzawa ’24, who went the same performance, said: “My favorite moment was when he was singing “Checkmate,” and he said ‘I’ll play it super dumb’ with even more energy than he does in the recording — all while twirling his hair.“

All in all, Conan’s concert was the best one I have ever been to — from his interaction with the fans, to his singing, and my personal favorite: his dancing. He definitely knows how to put on a show. I highly recommend listening to his music and his new album Superache, which is coming out June 24!