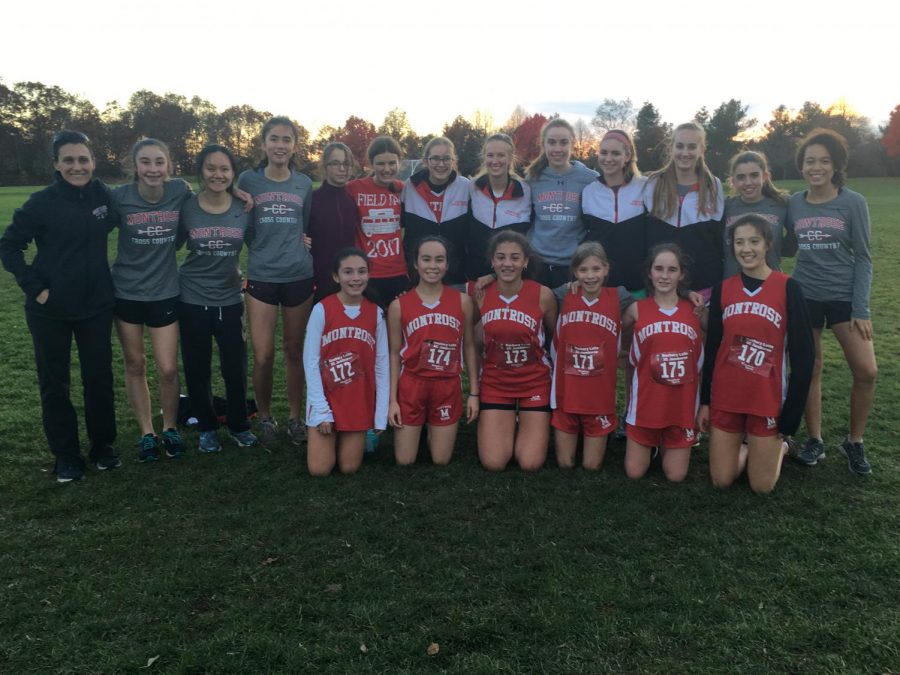 This past Saturday, on November 10, the Cross Country team saw the first snow of the year.  Six hours earlier, the team was filling up the Montrose van with all of our gears, snacks and blankets for a three-hour drive to New Milford, CT for the New England Prep School Track Association NEPTSTA division championship. We arrived in New Milford before twelve, and began two hours counting down until the race began. The worst part of a race is always the waiting because your head just generates thousands of scenarios of what may happen during the race. Our hearts beat faster and heavier as time flew by, but we knew we would transform the nervousness into energy at the start.

At 1:55 PM, five minutes before the start, we had our last Cross Country team prayer of this season. Though, I could not remember any word in the prayer as usual, everyone perceived the power of the team’s spirit expand as we huddled together. At that moment, we knew we had each other’s support. At 2 PM, a pack of people took off from the start line, and the crowds burst into cheers.

The course is a 5K course. The most challenging part came at the last mile: up-hills without any break. While my lung burned and my leg muscles started cramping, the snow suddenly fell down from the sky. “Snow, No Way. Not Today!!!” the negative voice shouted in my ears. The snow with heavy wind distracted me, until I heard someone yelling my name and saying: “Go! Go! Pump your arms. Think about Barthe,” the hill where our team usually works out. Then, the flashback of us running huge hills two times in a roll appeared in my head. The tough effort of us running from 200, 400… up to six miles in practice also gave me confidence in conquering that hill. More importantly, the love for the team would not allow me to take any break for three months.

After finishing the race, though, we could hardly talk. Everyone gave each other a big hug and a high five. Tears almost came out of my eyes. All of the memories in the season replayed in my head: the first win in our home meet; the unexpected thunder that came a minute before our race at Beaver Country Day (the meet was canceled, after we warmed up in the pouring rain.;, all of Disney and Christmas music on the bus; delicious team dinners at Julia’s and Kasey’s houses, and more.

In addition to those fun memories, our perseverance also impressed me. Emily and Caroline stayed strong for the whole season, despite injuries. Ignoring the weather,  like 90 degrees, hurricane rains or snow, we pushed our limits in every single meet and practice. When we united together on this day, Nov. 10th, our Varsity team ended up in the 4th place out of 22 schools in Division Three (first year)  for New England NEPSTA. The JV team also reached 5th place for JV girls’ race. Though, we walked out of the course with numbed hands and subdued noises, I believe all of us could confidently say: “I pushed my best, and I am proud of myself.”

Emily Bowman ’19 reflected on her cross country experience, she said: “I used to set limits on myself. Cross Country taught me that I have more potential than I thought. In this season, we had tremendous improvements, and we grew so much as a team. Though I will not be here next year, I am sure it will be better.”

Our team mom, Coach Nadeau, looked back at this season and said: “As my first year coaching at Montrose,I had a lot fun. I saw a group of girls who were supportive with everyone, and came to practice to do the workouts. We definitely had a successful season. The whole team was capable of sustaining their mental and physical strength in the Championship. No one sat back and felt sorry for themselves. As a coach, that’s all I can ask for.”

Just some shout-outs to Athletic Director Ms Ruggieri who showed up for our middle school and high school championship (three-hour drive). She also helped us to find extra meets at Brooks School and Beaver Country Day, and set up Montrose first Cross Country home meet in Homecoming. Cross Country would not have been the same without Ms.Ruggieri’s support.

Though the season was over, the perseverance we learned and happy memories we experienced will last forever.