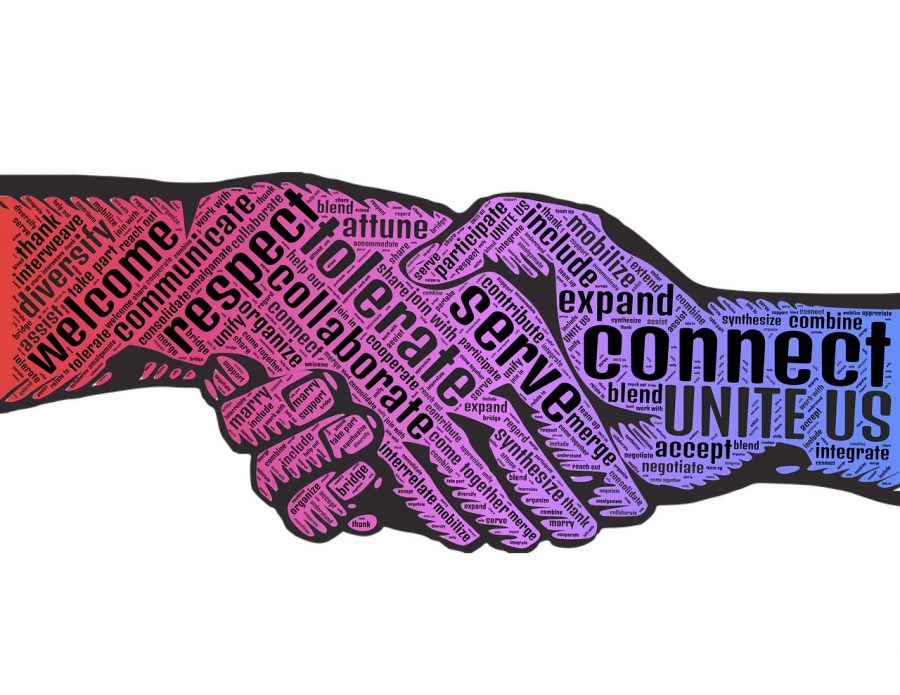 In the current political climate, it can be daunting, even scary, to talk politics with people who disagree with you. In the news and media, all you see is yelling, name-calling and hate, and it is hard not to bring that back into our personal lives and conversations. The narrative projected is to hate the other side, and ask questions to accuse, rather than to deepen our understanding of the other side’s perspective. As we entered our civics unit, Montrose’s AP Lang class developed a list of class norms to maintain a civilized and respectful attitude. During the civics unit, we viewed our class as a hopeful microcosm of the United States. Girls in class had opinions that spanned all over the political spectrum, and in sharing these conversation norms with all of you, we hope that the respectful conversations we had in class can expand to a larger sphere, and the world and political scene can become a more respectful, and understanding climate. All quotes are from students in the 2020 AP Lang Class.

Disagree with ideas, not people (respect people – no personal attacks)

Everyone’s political opinions are derived from what they believe to be the best solution to a problem. Just because someone disagrees with you does not mean they are a bad person; they just have a different perspective. You can disagree with their ideas, but don’t let your opinion of their ideas affect how you view and treat them as a person. Talk with them to see where they are coming from and to broaden your perspective of the issue. Don’t attack a person’s morals because of politics. Remember that they are a person before their opinion, and they deserve the same respect as everyone else.

Don’t put people in a box or make assumptions

Politics is not black and white. Every idea and opinion is nuanced, and oversimplifying complex ideas is never effective. You cannot come into a conversation with assumptions about a person’s views based on rumors or another view you know they hold. You need to enter a political discussion with an open mind and be ready to explore the nuances of every political opinion you are discussing.

Show the same respect inside and outside the classroom

When discussions are facilitated by a teacher, it is easy to show respect to the person you are disagreeing with. It is tempting, however, to talk badly about that person or their opinion with friends later. A very important layer to a political conversation is trust. When people share their political views, they are opening themselves up and are putting themselves in a vulnerable position. There needs to be mutual trust between the participants that once the conversation is over, neither will go and talk badly about the other. These norms need to be applied both inside and outside the classroom in order to maintain the trust between the two participants of a political conversation.

Use effective listening, and ask questions to understand, not to persuade

One element of the AP Lang Civics unit was a position paper, in which a person assumed the role of a policy expert, laid out a political problem or opinion, and then offered a next step forward. One student noted: “During our presentations in AP Lang, it helped to take notes during speeches. Listening with an open mind and asking clarifying questions was beneficial because it allowed me to understand other people’s perspectives and engage in better political conversations.” Don’t go into every political discussion viewing it as a debate, or trying to win. Ask questions to deepen your understanding of the views of the person in front of you, or to clarify points that they have made.

Resolve tensions as quickly as possible

“When having a discussion about politics, I’ve learned that it’s important to prioritize your relationship over the conversation. If something ends on a tense note, understanding that you value the person in front of you more than being right will prevent the relationship from disintegrating as a result of the conversation.” If a political discussion gets heated and emotions rise, it is better to calm down and resolve tensions as soon as you can, so that the animosity or awkwardness created does not have time to become a big thing. Yes, politics are important, but your relationship with friends and family is more important than being ‘right’ or winning a debate. You need to see the person in front of you, rather than just their opinion, and make sure that you prioritize them rather than their politics.

In Arthur C. Brooks’ Love Your Enemies, he talks about how both ends of the political spectrum believe in fairness and compassion, but both sides have a different approach on how to express those values. He further asserts that each side is trying to do what they believe is best, but each side has different moral foundations and therefore, different solutions. Find that moral common ground with the person you are talking to before you talk about solutions, so that each participant understands that the other isn’t ‘bad,’ but just has a different outlook. One student from the class noted: “Often when two people disagree it’s easy for them to assume that the person they disagree with doesn’t care about an issue. This assumption leads to personal accusations and does not promote productive conversation. Instead of attacking someone’s character, it’s important to acknowledge the common ground that both people care about an issue, they just have different approaches for how to solve it.”

Don’t invalidate or dismiss others’ opinions or views

What’s important to understand is that everyone’s opinions come from the best place, and that most of the time there is common ground between you and the person you are conversing with. Everyone has different personal experiences which affect their views, and you need to make sure you remember that they are trying to find the best solution to a problem (read norm #6) and they are entitled to hold whatever view that they do.

Be calm and settle your emotions

“It’s important to remember that everyone gets emotional when they are talking about something they care deeply about. But we must also consider that these emotions have to be put aside in order to have a productive conversation.” When emotions and passions are high, it is difficult to speak with reason and understand the ‘other side.’ When engaging in a political conversation, make sure that everyone is in the right headspace before you begin. If not, wait until people have calmed down, cleared their mind, and can speak articulately.

Don’t interrupt or talk over anyone else

One of the most important aspects of a civil political conversation is making sure that everyone has a platform to communicate and express their opinions. We flourish as people and friends when we hear and are able to respond respectfully to an opinion we disagree with: it broadens our perspective on the issue and opens our mind to new ideas. Don’t try to monopolize or dominate the conversation by shutting down the other person because they have a right to their ideas and opinions and deserve to speak about them just as much as you do.

“It is important to be patient when hearing others ideas, because that way we can fully understand another’s perspective and build a common ground.” Don’t move on in a conversation until everyone has voiced their perspective and felt heard. It is important to make sure everyone feels like they have a platform and attentive audience before the conversation shifts topics.

Be aware of your body language

“Sometimes when you’re having a discussion, even though you might not be saying anything, your body language can say just as much as your mouth. Make sure you pay attention to what someone is saying and let them know you’re listening.” Don’t close yourself off, make facial expressions, or roll your eyes when hearing opinions. Be genuinely interested in what the other person is saying, and make sure your body language communicates that you are open to hearing their opinions.

Be self aware and hold yourself accountable

It is not always easy to put these precepts into practice. We all mess up, and that’s ok. The most important thing is to realize when you make a mistake during these conversations and to hold yourself accountable. Reflect on what you can do better, and if the situation warrants it, talk again to the person you had the conversation with. Explain that emotions got high, that you weren’t thinking clearly, and apologize for not holding the most productive conversation. Then, try again! Don’t get discouraged and use what you’ve learned to have more productive conversations!