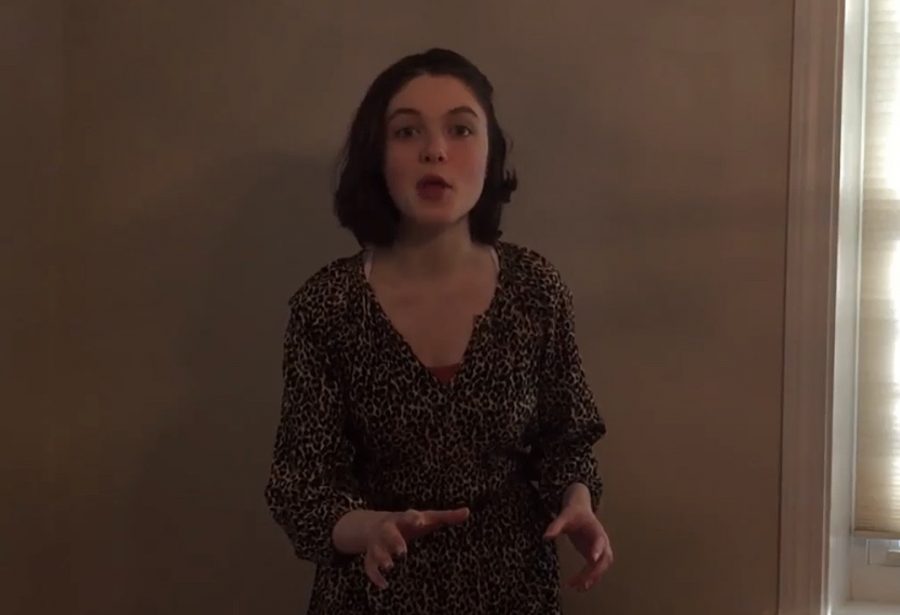 Next month, the English Speaking Shakespeare National Competition will be held virtually for students across America who have qualified for the national level. Our very own Anna Sheehan ‘21 will be competing, after winning the Boston branch of the competition. This is her fourth time entering the competition, second time advancing beyond Montrose, and her first time moving on to nationals. While the Boston branch of the competition was virtual this year, they tried to replicate the performance experience online as much as they could. Anna said: “I actually got to see other people perform.” Rather than just send in videos of their performance, they were able to warm up, see the other actors perform, and get to know each other over Zoom. Each of the actors performed one monologue and one sonnet from a competition-approved list of Shakespeare selections.

Anna chose to perform one of Puck’s monologues, which she had memorized her sophomore year for her performance in A Midsummer Night’s Dream. She said: “I thought about a lot of different ones, and honestly, it came down to one that I had already memorized, but it ended up being a really good one because as I was doing it, I was like, ‘Oh yeah, I can do this — this is really fun!’” Anna also performed “Sonnet Two,” which she initially chose because she understood what it was saying the first time she read it. She said: “It was the only one that when I read it the first time, I knew what the speaker was saying. And that told me, oh, maybe I should do this one. There was a lot more I uncovered as I read it more. ”

Anna has done this competition, along with other similar competitions, all four of her high school years. Talking about the benefits of competing, she said: “It gives you a fuller sense of what it is that you are doing.” Rather than just experiencing performing with Montrose, she was able to expand her realm and gain a fuller sense of acting outside of school activities. “It gives me a taste of different ways of looking at something. There are other actors who are the same age as me!” Knowing that she wanted to act, she began entering competitions in order to broaden her experience. The competitions enabled her to gain experience without having to complete a long camp or sign up for something that conflicted with other activities. She said: “The great thing about a competition is that you don’t have to worry so much about the commitment.”

For anyone who may be interested in competing in this competition or others, but is nervous or unsure, Anna said: “ You just gotta do it, and start it now. If you do it, and you don’t feel great about what you do, do it again! But start now, so that you give yourself as many chances as possible. I mean, it took me four years to move beyond Montrose in competitive rounds.” She also highlighted the importance of practicing — a lot. But don’t sweat it! It is important to enjoy what you are doing, and relax! When reflecting back, Anna said: “Why did I take it so seriously? I guess I’ve been trying to win now for four years, so now that I’m going to nationals, ooh that’s really exciting; and then I’m realizing, within a few months, all these competitions and high school activities, it won’t seem like such a big deal.” Anna has pursued her acting interest outside of class and outside of school, recognizing both the importance and the excitement that comes with it. Congratulations, Anna, on making it to nationals — break a leg in the next round!