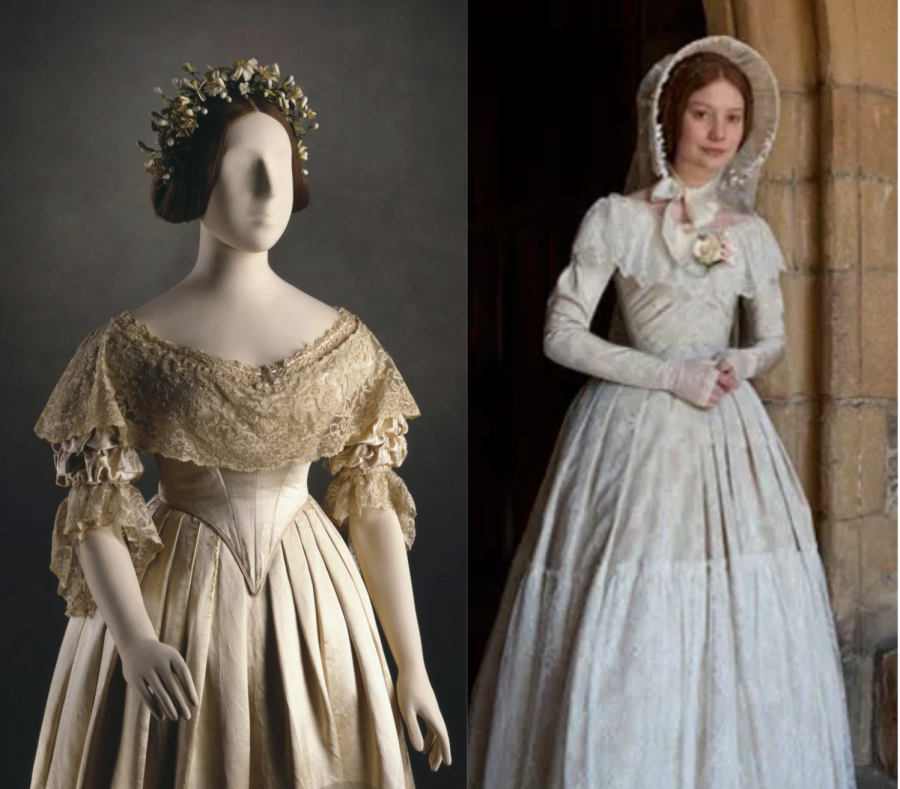 Unlike the 2011 Jane Eyre movie adaptation, many period films fall into the trap of prioritizing modern beauty standards and ideas about the past over accurate costuming and research. Too often does one see countless offenses to real clothing in movies set in the past. Jane Eyre doesn’t mess around with any of that nonsense. This movie adaptation, which stars Mia Wasikowska and Michael Fassbender, is well-researched and accurate; the outfits, hair, and accessories are all gorgeous. The story — spanning from Jane Eyre’s childhood in the 1830s to the end of the movie, around 1850 — demonstrates various trends and silhouettes on Jane and the characters around her. Fashion at the time of the movie, from flowy Neoclassical regency gowns of a few years previous to right before the crinoline era, changes vastly and is incredibly interesting. We’ll be exploring that, along with everything in-between in this deep-dive into the costumes of Jane Eyre 2011.

Jane is about ten years old at the start of the book, and I’m assuming that most of the story takes place around 1847. It’s fair to assume that she was a child in the later half of the 1830s. One of the best ways to identify fashion from the 1830s is the comically enormous sleeves that were in style at that time. Fashionable sleeves got so extravagantly poofy in this decade that women would often wear puffed-up undersleeves below their normal sleeves to make sure they were as voluminous as possible.

The movie creates the 1830s silhouette perfectly. For example, Jane’s aunt Mrs. Reed wears a brown dress with, of course, a set of lovely, huge sleeves. The straight across neckline and scrunched up detail on the front of her dress are both perfect. It resembles this purple dress from a fashion plate in an 1830s magazine. In the 1800s, when mourning a loved one, it was also common for people to wear jewelry containing or made out of the hair of their dearly departed. Mrs. Reed is wearing a black locket, which, because she is a widow, I believe could be one of these mourning lockets.

Young Jane’s outfits are less fashionable than her cousins’, who have larger skirts that would have been supported by lots of (sometimes stiffened) petticoats — along with poofy sleeves. Jane’s less prominent fashion makes sense because Mrs. Reed wouldn’t be worried about giving her least favorite niece the most fashionable clothes. The less extravagant outfits continue when Jane goes to Lowood, a charity school. There, all the students make their own dresses and undergarments, and they get poor supplies to make them with, so they wouldn’t be able to follow the wild fashions that were popular at the time.

Jane has a few dresses she wears casually as an adult at Thornfield and a black evening gown that she puts on whenever Mr. Rochester, her employer/love interest, is in town. The movie uses clothing to show the passage of time very well. For the rest of the movie, the clothing follows a more 1840s silhouette. Each informal dress Jane wears has a triangular bodice, high neckline, pleated skirt, and usually some variation of a white collar around the neck. Seeing these called me back, for they are grey with a design like plaid or stripes, both achievable and trendy for the 1840s.

Her evening gown, which she wears when Mr. Rochester comes to Thornfield, is much darker than her other clothes. It has a lower neckline, and one can see some of what is probably a chemise under it. Like many of the dresses, the ornamentation has a triangle shape coming down from the neck, lined with some frills.

Jane’s wedding dress leans much more towards the 1850s than her other gowns, which makes sense because Mr. Rochester would have bought it new for her. Jane’s other dresses were probably just old clothes she altered to make more stylish. The neck is lower and some fabric comes off of it and drapes over her shoulders. In the middle of that frilly bit, there are some flowers, a popular addition for the fashionable. She has a lovely veil-bonnet which is decked with different flowers. The wedding dress is white, which wasn’t popular until Queen Victoria wore a white one in 1840, but Jane’s dress is very on-trend for the 1840s.

After the wedding, though, is when we get to see Jane’s corset, or possibly stays–depending  on whom you asked in the 1840s. Stays were the predecessors to corsets, and the distinction between the two is difficult to define. Both garments had mostly the same function: support, posture, and silhouette. Throughout the 1840s, corsets changed significantly. Some corsets, like the one Jane wears with her wedding dress, followed an older style, but it wasn’t uncommon to see more curved corsets closer to what you’d see looking up “Victorian corset” on Google Images. It has straps and very little visible boning, as far as I could tell, like this image.

My favorite thing about this movie is the hair. The designs are absolutely beautiful. Many movies opt for a more modern hairstyle, thinking that it will look more attractive to a contemporary audience; but seeing the gorgeous styles that Jane wears in her hair throughout the movie, I can confirm that accurate hairstyles are a million times nicer. I absolutely loved the extravagant 1830s hairstyle given to Mrs. Reed in the beginning of the film; the doodlebops (not a historically accurate term)  at the side, the braids, and the oddly-shaped bun with something sticking out of it aren’t even the craziest styles worn at the time! Jane always has subtle, elegant braids and hair going below her ears along with a low bun, both common in the 1840’s and realistic for her character. Blanche Ingram has curls down the side of her face as well, which would be popular for a more high-class woman of the time. And of course, there is an abundance of bonnets, which aren’t shown in period films nearly enough.

Jane Eyre incorporates pristinely accurate fashion while still using it within the storytelling. Jane’s dresses vary in darkness and reflect her mood, and her subtle braided hair distinguishes her in comparison to other ladies in the movie with their face-framing curls. The changing costumes from Jane’s childhood show her growing up and establish the time period wonderfully.

Who could do such a masterful job? The costume designer’s name is Michael O’Connor. In a 2011 Vanity Fair article I found, the way he talked about making the costumes has made him one of my favorite costume designers ever.  According to his quotes in the Vanity Fair comments in the article, O’Connor used accurate patterns, fabrics, and stitching-down buttons and lining! He said: “There’s so much information from that time that there’s no excuse not to have it,” which I completely agree with. Just by looking at a few museums, fashion plates, and websites, one can find a whole world of information and styles that suit the storytelling of any period film. The 2011 film adaptation of Jane Eyre is proof of careful research and crafting to historical accuracy.