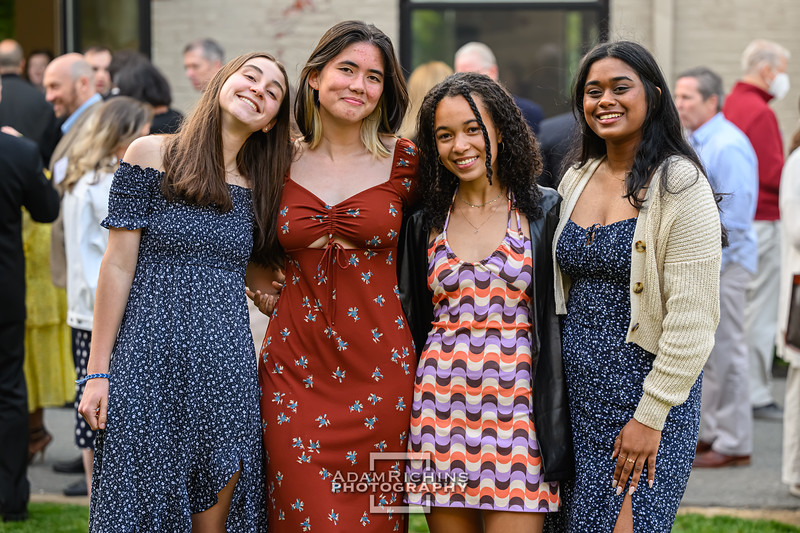 From left to right, seniors Kasey Corra, Tess Farr, Erica Brown, and Spandana Vagwala pose together at their senior dinner.

I can’t imagine a Montrose without Erica Brown. Ever since our first sweltering cross country practice, our paths have kept crossing. First came cross country and indoor track, then the Looking Glass and Multicultural Club, and, most recently, outdoor track. It seems we’ve been together for pretty much everything except academic classes — although we did just struggle through an AP biology exam together.

To me, Erica has always been a role model. When I joined cross country back in seventh grade, she and seniors Kasey Corra, Tess Farr, and Alanna Hyatt immediately made me feel welcome. She has always been someone who I feel comfortable around, despite our age gap. When I replayed the recording of our interview, I found more segments of us laughing than actual interview questions.

Not only is she my friend, but Erica also exudes excellence. As Looking Glass editor-in-chief, Multicultural Club leader, NEPSTA hurdler, soon-to-be student at Brown, and recipient of numerous awards at the senior awards ceremony, Erica provides an example of high achievement.

As this year’s Co-Editor-in-Chief, Erica played a huge role in shaping the Looking Glass. Besides always having a witty comment at staff meetings, she also wrote numerous articles (you can find all of them here), including articles on Ketanji Brown Jackson, Henrietta Lacks, Michelle Wu’s election, and Omicron. For Erica, the Looking Glass was an outlet to learn more about politics and STEM, both of which she is passionate about.

When Erica first came to the Looking Glass as a freshman, she intended to be a photographer, but she soon became a writer for the politics section, incorporating her interest in politics with her writing. “As I became more politically aware throughout high school, I was able to pull in what I did in the Looking Glass with what I saw in the world around me,” she said.

Besides writing, she also values the Looking Glass for the relationships it brought her. She commented: “I think some of my closest friends have been in that club, and I’ve also been able to get so close with underclassmen. I think that most of my relationships with underclassmen have come from the newspaper because you have that mentoring relationship, but you also get to know them on a personal level as well.”

Not only did she lead the newspaper, but she also pioneered the Multicultural Club. “After George Floyd, I began to notice that Montrose lacked any student clubs that talked about different cultural groups,” she said. “I knew that I would appreciate a place to discuss those issues, and by talking to other students, I realized that it wasn’t just me.” Leading discussions about 2020’s Black Lives Matter protests, police brutality, and Eurocentric beauty standards, she helped many students become more politically aware and more committed to combating racism.

Through the club, Erica also organized a school supplies drive for primary-school students in Nigeria, collecting backpacks, notebooks, pencils, and more. When she visited her relatives in Nigeria, she was able to deliver the supplies to the children.

Reflecting on the club’s growth over the last two years, she said: “I’m really proud of what we’ve accomplished within Montrose and in the global community with the school supplies drive. I’m so excited to see what Cecilia and Calista will do next!”

Her faculty advisor through all this? Mrs. Whitlock — the same Mrs. Whitlock that advises the Looking Glass. This year, Erica officially became Mrs. Whitlock’s mentee. “Even though she only became my mentor this year, she’s kind of been my mentor for all four years,” she said. “Her advice has been something very valuable to me going through the college application process and in helping me develop a growth mindset — Mrs. Whitlock is perfect for that.”

As an incoming freshman, Erica fit right in on the cross country team. As a brand-new middle schooler, I had no idea that she was new until a few months later. About that first summer practice, she said: “I met people who are some of my closest friends today.” Her advice to new students? “Getting involved with sports is the best way to get involved in the Montrose community.”

After four years on the cross country team (and indoor track, too), she decided to join the outdoor track team in her senior year. Not one to shy away from a challenge, Erica decided to try hurdles, becoming the team’s third hurdler. Over the course of the season, she steadily improved and finished the season with a strong showing at NEPSTA championships. In the words of Coach Kerr, it seems that old dogs can learn new tricks.

The Next Step: Brown University

At Brown, Erica plans to major in neuroscience on the pre-med track, but nothing’s set in stone. “Brown is known for a very open curriculum, and I think that’s good for me because I want to use those first two years to just figure out what I want to do. Even though I know I want to do medicine, I think I need that time to explore other things, like the liberal arts or just other realms of science,” she said.

Her advice to us fits perfectly with that decision. During our interview, she told me: “If you see something that interests you, just do it. Take the class, join the club, write the article, and if you ever need help, just ask for it.”

Erica, no matter what you do in college (you have plenty of time to figure it out), we are so proud of you. Congratulations on all that you’ve achieved so far, and we can’t wait to see what you do next!