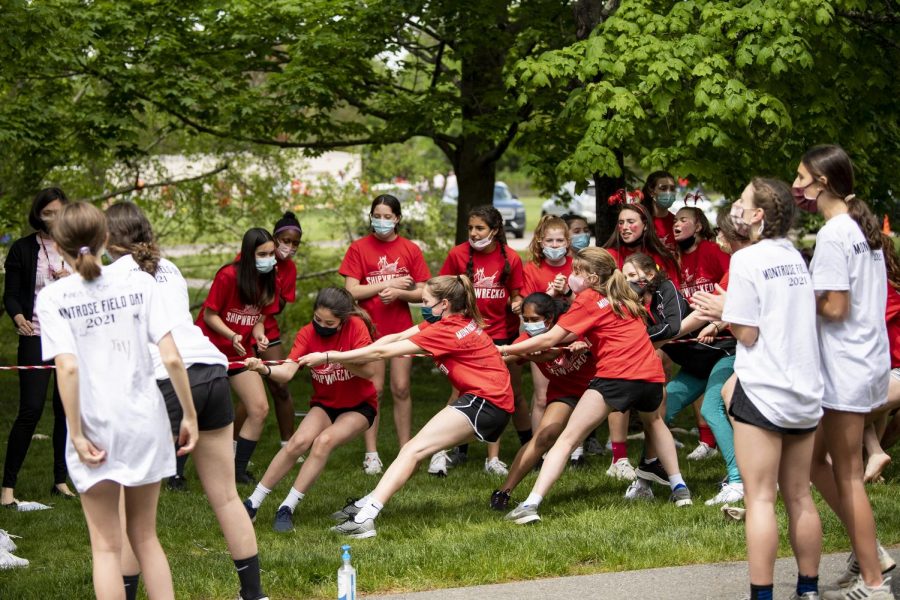 Red and white teams competing in tug of war during Field Day 2021.

Any visitors to Montrose on Thursday, May 13th would have found girls in red and white shirts running around the campus and participating in various activities while screaming, cheering, and letting loose. Field Day is an annual event at Montrose organized by the student government exec team and is a day where we celebrate our Montrose pride through a competitive spirit between red and white teams, each captained by a senior or two, which include girls from all grades in friendly sportsmanship and rivalry.

Each year, the student government chooses a theme and organizes games to go along with it.  This year’s theme was “Shipwrecked,” and each of the games matched the theme. The games included musical chairs, tug-of-war, dodgeball, trivia, and manhunt.  Manhunt was a new activity this year. Faculty members hid around the school, including Dr. Bohlin, Mrs. Demirjian, and Ms Hanrahan. Each teacher was worth a different amount of points corresponding to how long they had taught at Montrose; when students found a teacher, they earned the ransom points based on their veteran years. Mrs. Demirjian was the prize because she was worth 27 points, but she was not too hard to find. Dr. Bohlin, worth 24 points, hid on the roof behind the school; finding her proved more challenging. Students were tasked with searching the school for the teachers and collecting points. Theresa Marcucci ‘23 said: “It [manhunt] was so fun; I think we should do it every year.”  Manhunt proved the favorite of all.

Field Day signifies the end of the red and white team competitions for the year.  Each year, the red and white teams are each split into mini-teams led by seniors.  Each mini-team chose a name at the beginning of the year and competed during Common Homerooms throughout the year for points.  The white mini-team with the most points was the Great White Sharks with 174 points, and the winning red team was the Daredevils with 108 points.  Unfortunately for those of us on the white team, this year’s victor was the red team with 768 total points. When the winner is announced, the winning red or white team takes a victory lap around Miracle Field. Anna Sheehan ‘21 enjoys this tradition. She said: “In general, I think my favorite part of Field Day… is the end, the victory lap. Even if it’s not my team, it’s the best part.”

Despite the rowdy yet friendly day’s division into red and white teams, Field Day is a day of unity at Montrose. Every year, girls from each grade are able to come together and have fun. Cate Lynch ‘24 said: “I really liked the community aspect.”  Girls are given the chance to spend time with those in other grades that they do not often see.  Theresa Marcucci ‘23 added: “There is so much energy walking around at Field Day. Everyone is so excited to be there, and everyone is so pumped up.”

The day ended with a visit by a frozen lemonade truck.  Lovey Moore ‘24 said: “The lemonade truck was amazing, especially because it was 80 degrees that day and we were all really hot.”  T-shirt signing is one of Lovey’s favorite traditions. She enjoyed that we could “toss a Sharpie around and sign little inside jokes or compliments.”

Field Day is a favorite tradition of many students.  It is a fun way to wrap up the year with a celebration that has persevered through a global pandemic.