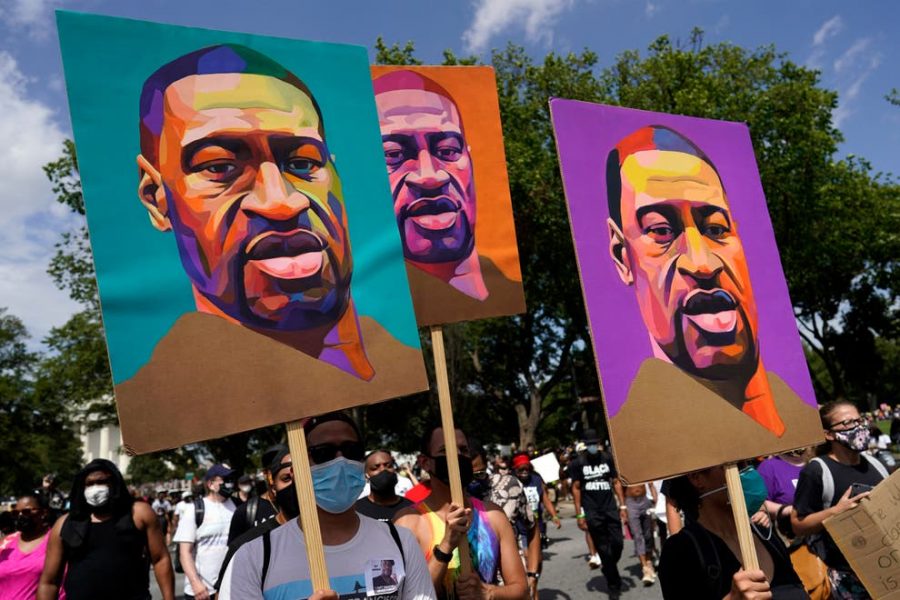 It's been one year since the murder of George Floyd, and there have been improvements made throughout the system. Although there are still many changes to implement, the conviction of Derek Chauvin is an important step in the path towards justice. The Floyd family attorney said: "This case is a turning point in American history for accountability of law enforcement and sends a clear message we hope is heard clearly in every city and every state."

On May 25, 2020, a video of former police officer Derek Chauvin kneeling on the neck of George Floyd in Minneapolis, Minnesota went viral across the Internet. A little over an hour later, he was proclaimed dead by emergency responders. Soon after, protests like never before rocked the nation shouting “Black Lives Matter” and “Defund the Police.” Riots broke out in cities and monuments were trashed across the country. The tragic murder of George Floyd truly showed the ugly head of police brutality. Christopher Harris, a close friend of Floyd, said: “When you try so hard to put faith in this system, a system that you know isn’t designed for you, when you constantly seek justice by lawful means and you can’t get it, you begin to take the law into your own hands.”

These protests calling for justice occurred not only in the United States, but throughout the world. In the British city of Bristol, protestors brought down a statue of a 17th century slave trader and threw it into their harbor. Private businesses including Ben and Jerry’s, Uber, and so many more demanded that the criminal justice system recognized the crime that had been committed. Sports leagues such as the NBA and NFL took a stand. The NBA’s Milwaukee Bucks even boycotted a police game to protest the shooting of Jacob Blake, who was killed in August 2020. Former President Trump threatened to involve the military in cities that were protesting. The activist group Anonymous returned to the surface with threats to the Minneapolis police department and claimed to have hacked their website. The murder of George Floyd truly shook the world in every sense.

So one year has passed, but what’s changed? One important development that has occurred relating to the death of George Floyed was the final verdict on Derek Chauvin’s trial. On April 20, 2021, Derek Chauvin, the officer that murdered George Floyd and catalyzed the movement for the end of police brutality, was found guilty on all three verdicts: second degree murder, third degree murder, and second degree manslaughter. He could spend up to 75 years in prison. This sentencing brought a measure of peace for Floyd’s family and friends. LaTonya Floyd, George’s sister, said: “I feel like heaven is standing on my shoulders. My brother got justice, and that’s very rare. He didn’t deserve that. He didn’t deserve none of that.” The Floyd family attorney declared: “Painfully earned justice has arrived for George Floyd’s family and the community here in Minneapolis, but today’s verdict goes far beyond this city and has significant implications for the country and even the world. This case is a turning point in American history for accountability of law enforcement and sends a clear message we hope is heard clearly in every city and every state.” When Chauvin’s sentencing was announced, the crowd outside the court began to dance and cheer, excited that justice for Floyd’s murder had been served. The Floyd family even received a phone call from the Biden-Harris administration. Vice President Kamala Harris said: “This is a day of justice.”

Justice appeared to be a recurring theme throughout both the Black Lives Matter movement itself and in the celebrations following Derek Chauvin’s sentence. The biggest call made in the past year has been for justice to be achieved for black lives. During President Biden’s inauguration, Amanda Gormon’s poem “The Hill We Climb” perfectly embodied the themes of race and racial injustice that America has seen throughout the past year. When asked about what inspired her poem for the inauguration, Gormon told the New York Times: “We have to confront these realities if we’re going to move forward, so that’s also an important touchstone of the poem.There is space for grief and horror and hope and unity, and I also hope that there is a breath for joy in the poem, because I do think we have a lot to celebrate at this inauguration.” One line of the poem described the lesson learned during the Black Lives Matter movement: “We’ve learned that quiet isn’t always peace, and the norms and notions of what “just” is isn’t always justice.” The title of the poem itself – “The Hill We Climb”- signifies how the United States is climbing a hill, slowly struggling to find its way towards justice, but nevertheless, getting there.

Despite these positive changes, there are still improvements to be made. According to the US Census Bureau, cities spend an average of one-third of their budget on law enforcement. Some cities, such as Baltimore and Los Angeles, heeded the calls to defund the police and redirected some of their police departments’ funds to other parts of the budget. On the other hand, police brutality has continued throughout the country despite the progress that has been made. A recent NPR poll demonstrates that only 17% of Americans believe that race relations are better now than they were a year ago. In the first five months of 2021 alone, there have been several black victims of police brutality. The site mappingpoliceviolence.org claims that there have only been six days in 2021 where a police officer has not killed a civilian, although the details of unique cases are not assessed. Even in Hopkinton, just a few miles away, Mikayla Miller, a young black girl, was found dead behind her house. Police ruled her death to be a suicide before the medical examiner’s report was even released. Since some of the children who were bullying Miller the day before were children of those police officers, the integrity of their verdict was questioned. Lost confidence in police officers over race relations persists, despite claims by some that the problem is individual officers rather than a characteristic pattern within the institution of policing in the US.

Some also have taken issue with a variety of progressive causes associated with the Black Lives Matter website, yet few contest that problems in policing patterns among communities of color have disproportionately endangered black lives. Yet, even those supportive of the Black Lives Matter movement are concerned that, like many other social justice movements, a movement can take the world by a storm for a few weeks or months, but the support slowly begins to die down, and people move on. But people of color live with a fear that one can’t move on from. I have two brothers, and when I look at rates of disproportionate drivers with darker skin tones pulled over by police, I worry for them. When I think of Trevon Martin whose hoodie made him suspicious, I worry about my brothers, and my cousins, and my family in general. Their lives matter, as do others who share darker skin tones, and they should not live in fear of the police.

Although there are still many challenges to overcome within the criminal justice system as a whole, it’s important to recognize how many changes have been made in the past year. The fight for racial and social justice is a long term battle, not a short one. It’s a fight that’s been fought by black Americans for centuries, and the United States has made significant progress in just one year. Changes are always being made, and everyone has a voice they can use to fight for what they believe in.