Montrose Lacrosse Sends Off Their Seniors 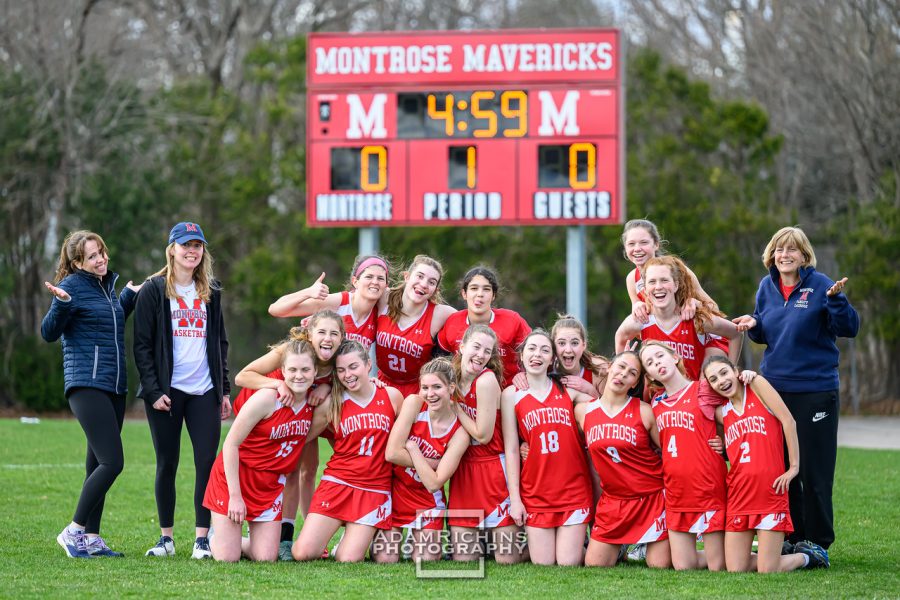 The lacrosse team poses for a photo on Miracle Field.

The Varsity Lacrosse season wrapped up last Friday with a game against Medway High School. On Monday, May 9, the lacrosse team celebrated its seniors on Miracle Field in a game against LCA. The team pulled off a big win: 17-3. LCA is in the league above the IGC, so because of this win and the rest of the blowout season, the Varsity lacrosse team is looking to move into the next league.

This could not be accomplished without the talented senior athletes on the team. To celebrate the final home game for the seniors, the field was decorated with signs for each of the seniors, and after the game, the team celebrated in the A&A with pizza and cupcakes. The coaches spoke about each of the seniors and handed them each roses. Nora Kelly, Caroline Piorkowski, Anna Rose, and Catherine Olohan have led the team to an undefeated IGC season and have been vital players in many games. In addition to these seniors, Colleen Casey and Monica Crevier, who have both been on the team in the past, supported the team as managers.

Nora has been on Varsity Lacrosse since eighth grade. She always has a positive attitude and knows how to make everyone laugh. Nora is an expert attack player, and she has scored many goals and given assists for the team this season.

Caroline has also been on the team since eighth grade. She is a natural leader and an extremely skillful player on the field. She dominates the midfield, from the draw to pressing the other team’s defense. Caroline is a consistent goal scorer and playmaker for the team. Next year, she will be playing lacrosse at Gordon College. The Varsity Lacrosse team can’t wait to see some of her games and support her.

Catherine Olohan is a wonderful addition to the team. She joined last year and has solidified her skills over these past two seasons to become an outstanding defender. Catherine is also the Clubs and Classes editor for the Looking Glass, and she will be greatly missed next year.

Anna Rose has been a wonderful asset to the team since she joined in her eighth-grade year. Anna plays low attack, so she is always looking to lead the team through plays or score on the crease roll. Anna is a great leader on the team, running warm-ups and helping to organize drills.

We will miss these seniors so much next year, but we know that they will do great in college! Thank you seniors, and good luck!